P3063 - The Two-Year Journey of a Patient With Chronic Pneumatosis Intestinalis and Scleroderma: A Case Report 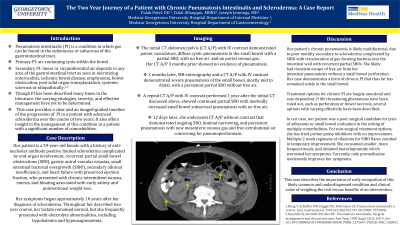 Introduction: Pneumatosis intestinalis (PI) is a condition in which gas can be found in the submucosa or subserosa of the gastrointestinal tract. PI occurs in multiple conditions, including necrotizing enterocolitis, ischemic bowel disease, bowel obstruction, post solid organ transplantation, and systemic sclerosis. Though PI has been described many times in the literature, the varying etiologies, severity, and management have yet to be determined. This case provides an interesting two-year image-guided timeline of the progression of PI in a patient with scleroderma.

Case Description/Methods: A 59-year-old female with anti-nuclear antibody positive limited scleroderma, recurrent partial small bowel obstructions (SBO), and small intestinal bacterial overgrowth (SIBO) presented with chronic nausea, emesis, and bloating associated with early satiety and unintentional weight loss that began ten years after her diagnosis of scleroderma. She has had benign abdominal exams and her lactate has remained normal, but she frequently presents with abnormal electrolytes. Her initial CT abdomen/pelvis (CT A/P) with IV contrast demonstrated diffuse areas of pneumatosis in dilated small bowel, which was not present on imaging three months prior. Two months later, MR enterography showed severe pneumatosis of the small bowel with partial SBO. A CT A/P without contrast, one year after the initial CT, showed continued partial SBO with diffuse subserosal pneumatosis with new mesenteric venous gas without pneumoperitoneum. She was deemed not to be a good surgical candidate and managed conservatively. Both proton pump inhibitors and metoclopramide failed, but a trial of promethazine and rifaximin with smaller, more frequent meals improved her symptoms temporarily.

Discussion: Over two years later, she continues to be symptomatic with intermittent flares. Her chronic small bowel PI is likely due to a combination of poor motility secondary to scleroderma complicated by SIBO with translocation of gas-forming bacteria into the intestinal wall and recurrent partial SBOs. Treatment options for chronic PI are largely case dependent. Our patient is likely a poor surgical candidate for lysis of adhesions or small bowel evaluation due to her multiple comorbidities. Non-surgical options include eating smaller, more frequent meals, avoiding gas-forming food, a trial of pro-motility agents, and treatment of SIBO with antibiotics. This case describes the importance of early recognition of this likely common and underdiagnosed condition. 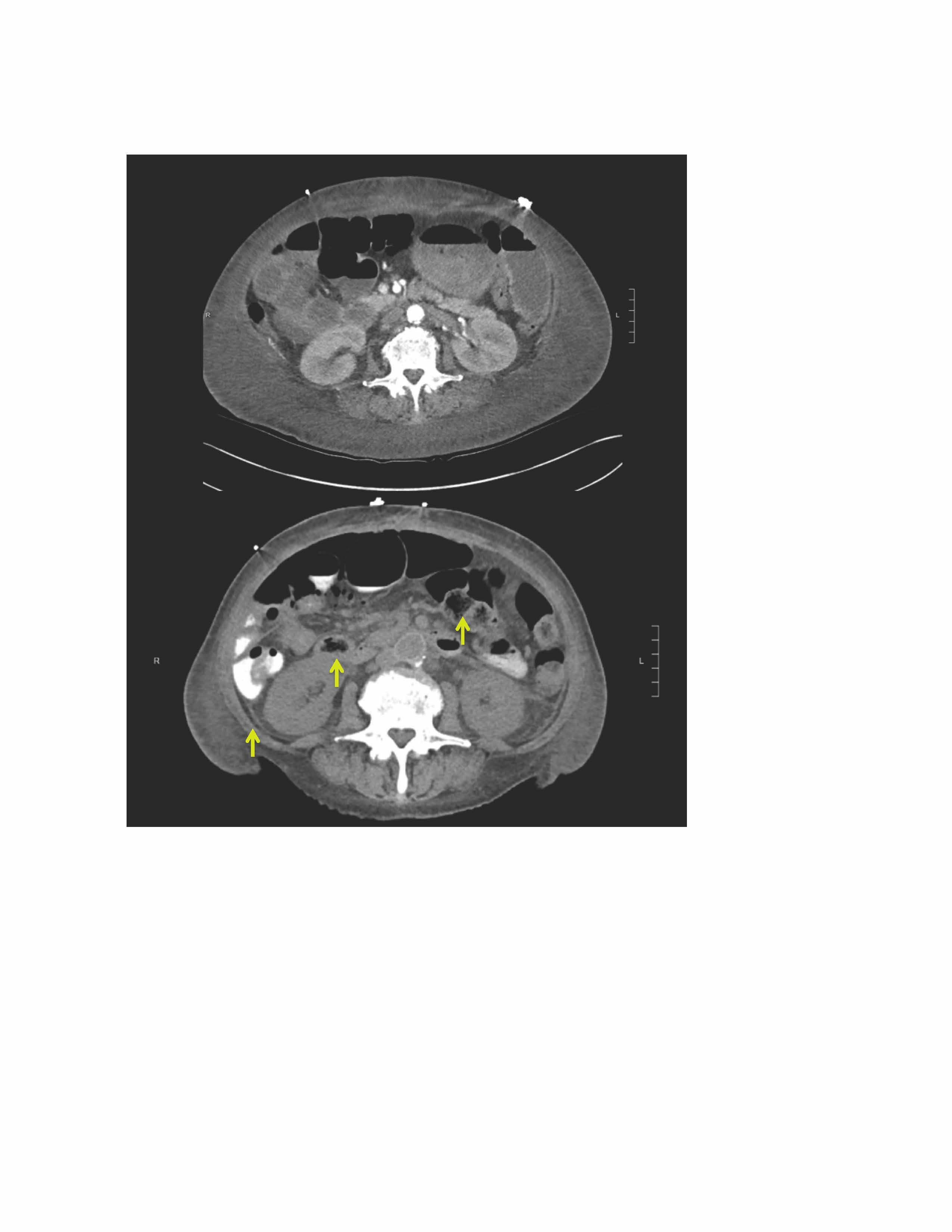