P3069 - Prophylactic Endoscopic Gastrostomy in Patients With Head and Neck Cancer: A Canadian Experience in an Academic Oncology Center From 2003-2019 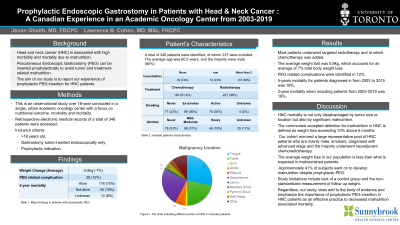 Introduction: Head and neck cancer (HNC) is the sixth commonest cancer in the world. It is associated with high morbidity and mortality due to malnutrition. To avoid the effect of tumor-related anatomical obstruction and systemic therapy toxicity, enteral nutrition support through Percutaneous Endoscopic Gastrostomy (PEG) can be inserted prophylactically. The aim of our study is to report our experience of prophylactic PEG insertion for HNC patients. This is an observational study over 16-year conducted in a single, urban academic oncology center with a focus of nutritional outcome, morbidity and mortality.

Methods: Retrospective electronic medical records of a total of 346 patients were accessed. The inclusion criteria were patients with HNC above 18 years old from 2003-2019 who underwent prophylactic endoscopic gastrostomy. Gastrostomy tubes that were inserted surgically or by fluoroscopic guidance were excluded.

Results: A total of 346 patients were identified, of whom 237 were included. The average age was 60.5 years, and the majority were male (80%). Malignancies were categorized based on anatomical location. (table 1) Cases were also distributed according to TNM staging. Most patients underwent targeted radiotherapy and to which chemotherapy was added.

Discussion: HNC mortality is not only disadvantaged by tumor size or location but also by significant malnutrition. The commonest accepted definition for malnutrition in HNC is defined as weight loss exceeding 10% above 6 months. Our cohort mirrored a large representative pool of HNC patients who are mainly male, smokers, diagnosed with advanced stage and the majority underwent neoadjuvant chemoradiotherapy. The average weight loss in our population is less than what is expected in malnourished patients. Approximately 41% of subjects went on to develop malnutrition despite prophylactic PEG. Study limitations include lack of a control group and the non-standardized measurement of follow up weight. Regardless, our study, does add to the body of evidence and emphasize the importance of prophylactic PEG insertion in HNC patients as an effective practice to decreased malnutrition associated mortality.