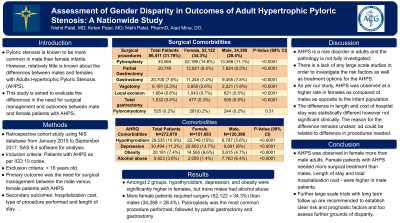 Introduction: Pyloric stenosis is known to be more common in male than female infants. However, relatively little is known about the differences between males and females with Adults Hypertrophic Pyloric Stenosis (AHPS). This study aimed to evaluate the differences in the need for surgical management and outcomes between male and female patients with AHPS.

Methods: We performed a retrospective cohort study of the National Inpatient Sample (NIS). Inclusion criteria included the diagnosis of AHPS using the ICD-10-CM Code, admitted from Oct 2005 to Dec 2015 with the exclusion of patients < 18 years old. We used the SAS 9.4 software to run the analysis. The primary outcome was to assess the rate of surgical management in the male versus female group. The secondary outcomes were (1) type of procedure performed, (2) length of stay, (3) total hospitalization cost, and (4) in-hospital mortality between the two groups. Confounding factors including age, race, and insurance type were adjusted for using multivariate regression analysis.

Discussion: Pyloric stenosis is more common in male infants than females, however, in the adult population, AHPS is reported higher in females as compared to males. As per our study, female patients with AHPS reported more surgical treatment than males. However, the in-hospital mortality – as well as the length of stay and total hospitalization cost - were higher in male patients.

Figure: Surgical procedures and outcomes in patients with AHPS.