P3107 - The GAVE That Keeps on Giving: A Case of Refractory Gastric Antral Vascular Ectasia 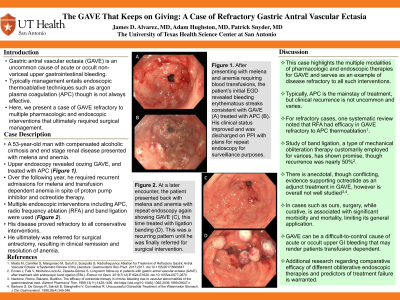 Introduction: Gastric antral vascular ectasia (GAVE) is an uncommon cause of acute or occult non-variceal upper gastrointestinal bleeding that typically can be managed with endoscopic thermoablative techniques such as argon plasma coagulation (APC). Here, we present a case of GAVE refractory to multiple pharmacologic and endoscopic interventions that ultimately required surgical management.

Case Description/Methods: A 53-year-old man with compensated alcoholic cirrhosis and end stage renal disease presented with melena and anemia. Upper endoscopy revealed oozing GAVE, which was initially treated with APC. Over the following year, he required recurrent admissions for melena and transfusion dependent anemia in spite proton pump inhibitor and octreotide therapy and multiple endoscopic interventions including APC, radio frequency ablation (RFA) and band ligation. His disease proved refractory to all conservative interventions, and he ultimately was referred for surgical antrectomy, resulting in clinical remission and resolution of anemia.

Discussion: This case highlights the multiple modalities of pharmacologic and endoscopic therapies for GAVE and serves as an example of disease refractory to all such interventions. Typically, APC is the mainstay of treatment for GAVE, but clinical recurrence is common, with rates from 35-78.9%. There is some evidence supporting the use of RFA in patients with GAVE refractory to APC thermoablation. Band ligation, a type of mechanical obliteration therapy customarily employed in the treatment of varices, has shown some promise as well, though recurrence rates approach 50%. There is anecdotal but conflicting evidence supporting the use of octreotide as a pharmacologic adjunct in the management of GAVE. In cases such as ours, surgery, which is curative, may be necessary. However, significant associated morbidity and mortality limit its application. In summary, GAVE can be a difficult to control cause of acute or occult upper GI bleeding that may render patients transfusion dependent. Conservative therapies are of limited utility. Additional research regarding comparative efficacy of different obliterative endoscopic therapies and predictors of treatment failure is warranted. 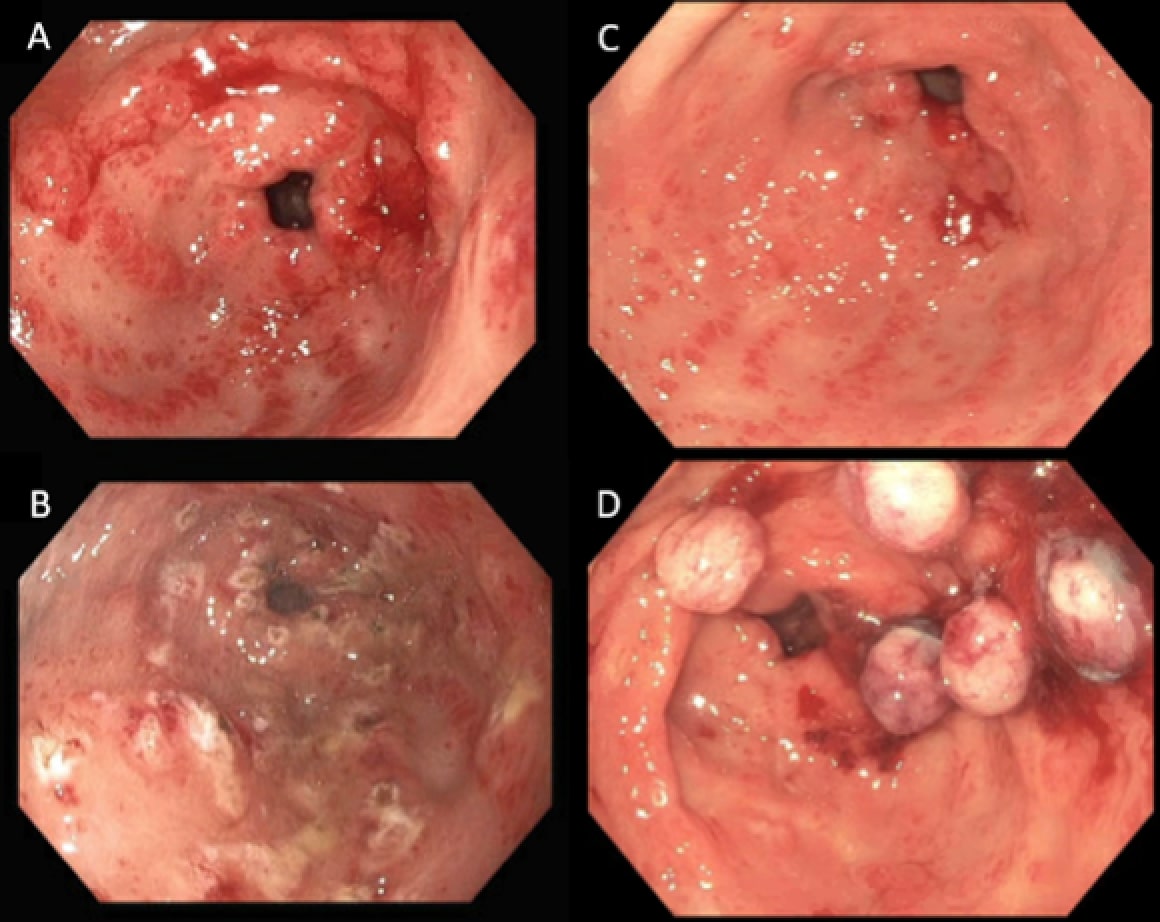 Figure: An early endoscopic exam of the patient revealed bleeding GAVE (A) treated with APC (B). Later, after presenting back with melena and anemia, endoscopy, once again, showed GAVE (C) treated with banding (D). These were two out of several endoscopies for GAVE that ultimately prompted surgical referral.