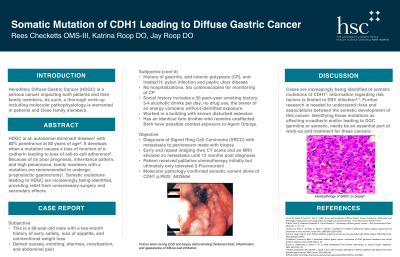 Introduction: Signet Ring Cell Carcinoma (SRCC) is associated with Hereditary Diffuse Gastric Carcinoma (HDGC) often due to loss of e-cadherin and cell-to-cell adhesion. Germline mutations leading to hypermethylation of CDH1 are common and have an autosomal dominant inheritance pattern. E-cadherin mutations are also associated with an increased risk for lobular breast carcinoma (LBC), suggesting genetic testing in family members if LBC or DGC is diagnosed before age 50. Given the poor prognosis of HDGC, inheritance pattern, and prophylactic gastrectomy treatment in known carriers, it is a cancer requiring thorough work-up for both patient and family members.

Case Description/Methods: This is a case of a 68-year-old man with complaints of early satiety, loss of appetite, and a 10-pound weight loss over two months. He denied nausea, vomiting, alteration in bowel habits, and abdominal pain. He had a history of H. pylori infection (treated), peptic ulcer disease, gastritis, and colonic polyposis (CP). No hospitalizations. Six colonoscopies for monitoring of CP. Exposure history includes a 50 pack-year smoking history, 3-4 alcoholic drinks per day, no drug use, and the owner of an energy company – with no identified exposure. His workplace had known disturbed asbestos. He had an identical twin brother, who remains unaffected. Both had possible combat exposure to Agent Orange.

Discussion: Increasingly, the literature is identifying cases of CDH1 somatic mutations1. These hyper-methylated mutations may be secondary to Ebstein-Barr virus (EBV) infection. This case highlights the reality of DGC in absence of a family history. Identifying somatic vs germline mutations of DGC is of paramount importance to the treatment recommendations to family members of those with CDH1 mutations. 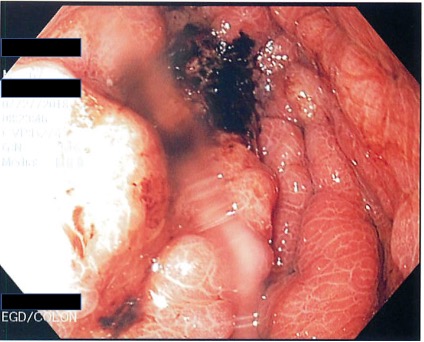