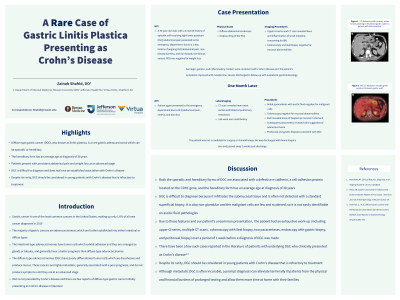 Introduction: Diffuse-type gastric cancer (DGC), or Linitis Plastica, is a rare insidious form of gastric adenocarcinoma. We present a case of a 39-year-old male who was initially diagnosed with Crohn’s disease and was ultimately found to have DGC.

Case Description/Methods: A 39-year-old male with a history of episodic abdominal pain presented with a 1-day history of RLQ abdominal pain, non-bloody diarrhea, and 15 episodes of non-bloody non-bilious emesis. Examination revealed an outpouching of the RLQ and diffuse abdominal tenderness. Abdominal CT and upper GI series revealed ileus with signs of IBD, and colonoscopy and ileal biopsy revealed no mucosal abnormalities. Testing of serological, genetic, and inflammatory markers was consistent with Crohn’s disease and his symptoms improved with mesalamine. The patient presented the next month with abdominal pain, vomiting, and diarrhea plus new-onset ascites and bilateral PEs. Paracentesis was negative for malignancy and EGD revealed areas of heaped-up mucosa in the stomach. A 3rd paracentesis was suggestive of carcinoma and peritoneal biopsy revealed metastatic DGC. The patient was not a candidate for surgery or chemotherapy and passed away 2 weeks later in home hospice.

Discussion: DGC is a rare aggressive adenocarcinoma with an unfavorable prognosis. Both the sporadic and hereditary forms are associated with a defective e-cadherin, a cell-adhesion protein located on the CDH1 gene, and the hereditary form has an average age at diagnosis of 38 years. DGC is difficult to diagnose because it infiltrates the submucosal tissue and is often not detected with a standard superficial biopsy. It is also non-glandular and the malignant cells are few and scattered, so it is not easily identifiable on ascitic fluid pathologies. Due to these features and our patient’s uncommon presentation, we did an exhaustive workup including endoscopy, colonoscopy, ileal biopsy, and multiple peritoneal fluid pathologies over a period of 1 week before our patient was ultimately diagnosed with DGC. There have been a few such cases reported in the literature of patients with underlying DGC who clinically presented as Crohn’s disease. Despite its rarity, DGC should be considered in young patients with Crohn’s disease that is refractory to treatment. Although metastatic DGC is often incurable, a prompt diagnosis can alleviate terminally ill patients from the physical and financial burdens of prolonged testing and allow them more time at home with their families.