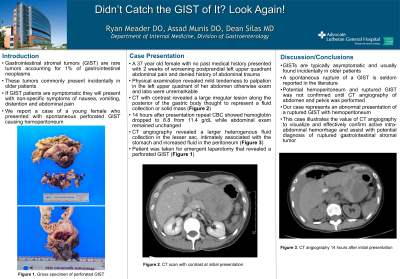 Introduction: Gastrointestinal stromal tumors (GIST) are rare tumors accounting for 1% of gastrointestinal neoplasms. These tumors commonly present incidentally and if symptomatic, usually present with non-specific symptoms of nausea, vomiting, distention and abdominal pain. We report a case of a young female who presented with abdominal pain and a spontaneous perforated gastric GIST causing hemoperitoneum.

Case Description/Methods: A 37 year-old female with no past medical history presented to the ED with two weeks of worsening postprandial left upper abdominal pain. She was in minimal distress, HR 119 and normotensive. There was no history of abdominal trauma. Physical exam revealed mild tenderness in the left upper quadrant, but otherwise a flat abdomen with normal bowel sounds, no guarding, rebound tenderness, or palpable masses. Laboratory studies showed hemoglobin 11.4 g/dL, normal liver function tests and lipase levels. A CT of the abdomen and pelvis with contrast revealed a large irregular heterogeneous fluid collection along the posterior of the gastric body. She received IVF and a PPI. Fourteen hours after initial presentation her abdominal exam remained unchanged, but tachycardia persisted with a drop in hemoglobin to 8.8 g/dl without clinical evidence of gastrointestinal bleeding. A CT angiography was performed that revealed a larger heterogeneous fluid collection in the lesser sac, intimately associated with the stomach and increased fluid in the peritoneum. The findings were suggestive of hemoperitoneum, and the patient was taken for emergent open laparotomy that showed a perforated GIST. She underwent a subtotal gastric resection with gastrojejunostomy. She had an uneventful postoperative course and was discharged home in 4 days.

Discussion: The spectrum of clinical manifestations can make diagnosis of a GIST a clinical dilemma. GIST, which typically are asymptomatic, are usually found incidentally in older patients. A spontaneous rupture of a GIST is seldom reported in the literature. The free fluid in the patient's abdomen on initial imaging, tachycardia, and acute drop in hemoglobin drew concern for potential hemoperitoneum, which was not confirmed until a CT angiography was performed. This case illustrates the value of CT angiography to visualize and effectively confirm active intra-abdominal hemorrhage. This case draws importance to recognition of a prompt diagnosis with imaging. This is a testament to the principle of forming an extensive differential diagnosis to avoid delayed treatment.