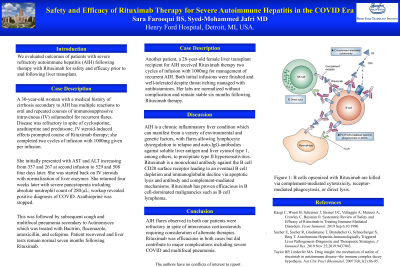 Introduction: We evaluated outcomes of patients with severe refractory autoimmune hepatitis (AIH) following therapy with Rituximab for safety and efficacy prior to and following liver transplant.

Case Description/Methods: A 30-year-old woman with a medical history of cirrhosis secondary to AIH has multiple reactions to oral and repeated courses of immunosuppressive intravenous (IV) solumedrol for recurrent flares. Disease was refractory in spite of cyclosporine, azathioprine and prednisone. IV steroid-induced effects prompted course of Rituximab therapy; she completed two cycles of infusion with 1000mg given per infusion. She initially presented with AST and ALT increasing from 357 and 267 at second infusion to 529 and 508 four days later. She was started back on IV steroids with normalization of liver enzymes. She returned four weeks later with severe pancytopenia including absolute neutrophil count of 280/µL; workup revealed positive diagnosis of COVID. Azathioprine was stopped. This was followed by subsequent cough and multifocal pneumonia secondary to Actinomyces which was treated with Bactrim, fluconazole, amoxicillin, and cefepime. Patient recovered and liver tests remain normal seven months following Rituximab.

A 28-year-old female liver transplant recipient for AIH received Rituximab therapy two cycles of infusion with 1000mg for management of recurrent AIH. Both initial infusions were finished and well-tolerated despite throat itching managed with antihistamines. Her labs are normalized without complication and remain stable six months following Rituximab therapy.

Discussion: AIH is a chronic inflammatory liver condition which can manifest from a variety of environmental and genetic factors, with flares allowing lymphocyte dysregulation to relapse and auto-IgG-antibodies against soluble liver antigen and liver cytosol type 1, among others, to precipitate type II hypersensitivities. Rituximab is a monoclonal antibody against the B cell CD20 surface receptor leading to an eventual B cell depletion and immunoglobulin decline via apoptotic lysis and antibody and complement-mediated mechanisms. Rituximab has proven efficacious in B cell-dominated malignancies such as B cell lymphoma.

AIH flares observed in both our patients were refractory in spite of intravenous corticosteroids requiring consideration of alternate therapies. Rituximab was efficacious in both cases but did contribute to major complications including severe COVID and multifocal pneumonia.