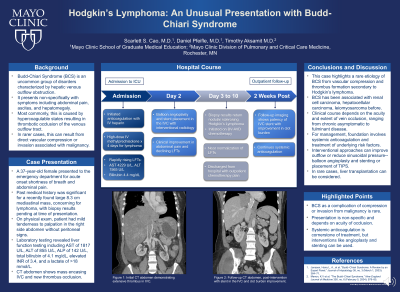 Introduction: Budd-Chiari Syndrome (BCS) is a group of disorders characterized by hepatic venous outflow obstruction. This is commonly due to thrombosis predisposed by hypercoagulable states and rarely from malignancy-associated vascular compression or invasion. We describe a case of BCS as a complication from Hodgkin’s lymphoma.

Case Description/Methods: A 37-year-old female presented to the ED with acute onset dyspnea and abdominal pain. Past medical history was significant for a recently discovered mediastinal mass concerning for lymphoma, with biopsy results pending at presentation. Laboratory tests demonstrated elevated liver function tests including ALT 855 U/L, AST 1817 U/L, ALP 142 U/L, total bilirubin 4.1 mg/dL, and an INR of 3.4. Notably, lactate was over >18 mmol/L. She underwent CT of the chest and abdomen which showed an 8.3 cm mediastinal mass occluding the IVC at the diaphragm with a new large thrombus within the intrahepatic IVC.

She was initiated on a heparin infusion but was noted to have rapidly worsening liver enzymes during the first day of hospitalization. With suspicion for lymphoma, she was also given high-dose IV methylprednisolone to reduce tumor burden. Ultimately, she was taken urgently for angioplasty and stent placement in the suprahepatic IVC, with measured improvement in hepatic to atrial gradient.

Discussion: This case highlights a rare etiology of BCS secondary to Hodgkin’s lymphoma associated with an occluding mediastinal mass and IVC thrombus. The clinical course of BCS can vary widely—from fulminant to chronic forms—depending on the extent of hepatic vein occlusion and acuity of obstruction. Many patients present non-specifically with abdominal pain, ascites, and hepatomegaly, requiring a high level of clinical suspicion to diagnose.

The cornerstone of BCS treatment is initiation of systemic anticoagulation and correction of the etiology of obstruction. Our patient was started on IV heparin and steroids to induce lymphocytolysis, and ultimately received chemotherapy for Hodgkin’s lymphoma. In patients with segmental occlusion in the hepatic vein or IVC, balloon angioplasty including stenting can be used to restore hepatic venous outflow. In severe disease, TIPS placement or liver transplantation can be considered.