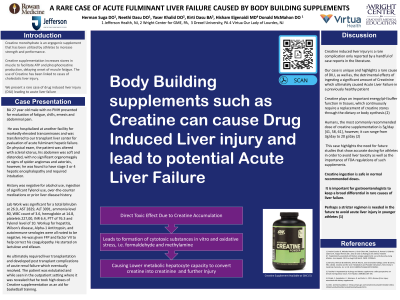 Introduction: Creatine monohydrate is an ergogenic supplement that has been utilized by athletes to increase strength and performance. Creatine supplementation increases stores in muscle to facilitate ATP and phosphocreatine production, delaying onset of muscle fatigue. The use of Creatine has been linked to cases of cholestatic liver injury. We present a rare case of drug induced liver injury (DILI) leading to acute liver failure.

Case Description/Methods: A 27 year old male with no PMH presented for evaluation of fatigue, chills, emesis and abdominal pain. He was hospitalized at another facility for markedly elevated transaminases and was transferred to our transplant liver center for evaluation of acute fulminant hepatic failure. On physical exam, the patient was altered with scleral icterus, his abdomen was soft and distended, with no significant organomegaly or signs of spider angiomas and asterixis, however, he was found to have stage 3 or 4 hepatic encephalopathy and required intubation. History was negative for alcohol use, ingestion of significant tylenol use, over-the-counter medications or prior liver disease history. Lab Work was significant for a total bilirubin at 26.9, AST 2829, ALT 3091, ammonia level 80, WBC count of 3.6, hemoglobin at 14.8, platelets 227,00, INR 6.4, PTT of 76.3 and tylenol level of 10. Workup for hepatitis, Wilson's disease, Alpha-1 Antitrypsin, and autoimmune serologies were all noted to be negative. He was given FFP and factor VII to help correct his coagulopathy. He started on lactulose and xifaxan. He ultimately required liver transplantation and developed post transplant complications of acute renal failure which eventually resolved. The patient was extubated and while seen in the outpatient setting where it was revealed that he took high doses of Creatine supplementation as an aid for basketball training.

Discussion: Creatine induced liver injury is a rare complication only reported by a handful of case reports in the literature. Our case is unique and highlights a rare cause of DILI, as well as, the detrimental effects of ingesting a significant amount of Creatinine which ultimately caused Acute Liver Failure in a previously healthy patient. This case highlights the need for future studies that show accurate dosing for athletes in order to avoid liver toxicity as well as the importance of FDA regulations of such supplements. It is also important for physicians to keep in mind rarer causes of liver failure.