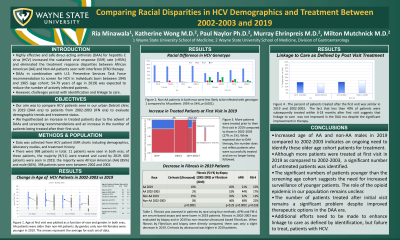 Introduction: The recent Direct-Acting Antiviral (DAA) era of HCV treatment has not only increased the sustained viral response (SVR) rate ( >95%), but also eliminated the treatment response disparities between African American (AA) and non-AA patients seen with interferon (IFN) therapy. Issues remain, however, with respect to identification and linkage to care in HCV patients.

The aim of our study is to compare 2019 HCV patients in our predominantly AA clinic to patients from 2002-2003. We hypothesize an increase in successfully treated patients due to the advent of DAAs and an increase in the number of patients being treated after their first visit.

Methods: Using electronic medical records, we identified 600 HCV patients seen in 2019 and compared them to 398 patients seen between 2002 and 2003. Data collected included demographics, laboratory studies (AST, ALT, HCV genotype, viral load), and treatment history. Fibrosis was assessed directly by FibroScan (2019) or biopsy (2002-2003) and as serum based calculations of the AST Platelet Ratio Index and FIB-4.

In both eras, AA patients were older than non-AA patients, with only non-AA females being younger in the recent era (Fig 1). Non-AA patients in both eras were less likely to be infected with genotype 1 compared to AA (95% vs 54%, p< 0.001). In 2019, patients of both races had higher rates of cirrhosis than earlier patients as assessed by ultrasound, but had less significant fibrosis when measured by serum based assays (APRI, FIB-4) (Table 1). When fibrosis by FibroScan and biopsy were directly compared, there was no difference between the two eras. More patients were treated prior to their visit in 2019 compared to 2002-2003 (159/585=27% vs 5/402=1%). For untreated patients, subsequent treatment within 1 year of the initial visit was similar in both eras (35%).

Discussion: Even though current therapies are oral, highly effective, and can be 6-8 weeks in duration, a significant number of patients were not treated within a year of first visit. The increased age of current AA and non-AA male patients suggests an ongoing need to identify older age cohort patients for treatment while the decrease in age of non-AA female patients suggests the need to increase surveillance of younger patients. 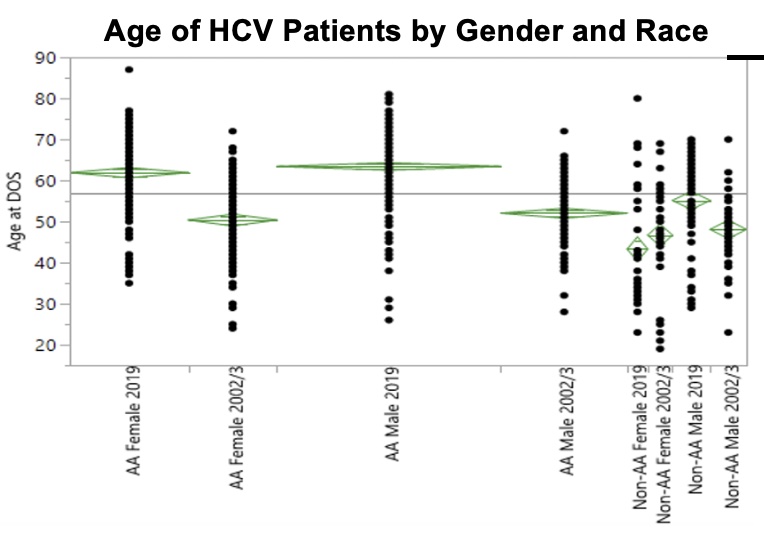 
Table: Rates of Cirrhosis and Fibrosis by Race and Era
Table 1. Rates of cirrhosis (measured by ultrasound) in AA and non-AA patients in conjunction with fibrosis assessment by FibroScan, APRI, and FIB-4.