P2776 - The Future of Endoscopic Treatment for Symptomatic Zenker’s Diverticulum: A Case Report 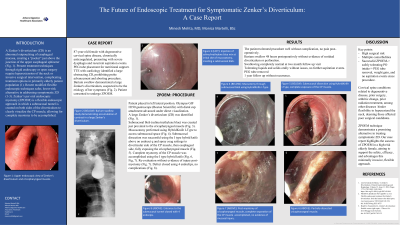 Case Description/Methods: An 87 year-old female initially presented for TEE probe with cardiology, but an obstructing Zenker’s diverticulum prohibited probe advancement. Severe dysphagia with episodic silent aspiration led to PEG tube placement for nutritional supplementation. Barium swallow evaluation pre-procedure demonstrated barium accumulation within a large Zenker's diverticulum. The patient was hospitalized on a heparin bridge, providing informed consent to proceed with endoscopic intervention. Propofol 80 mg IV and Succinylcholine 140 mg IV were administered, with vigilant cardiac monitoring for the entirety of the procedure. The gastroscope was inserted into the mouth and advanced under direct visualization to the second portion of the duodenum, carefully inspecting the UGI tract including a retroflexed view of the proximal stomach as the gastroscope was withdrawn. Evaluation of the upper airway, stomach, and duodenum to the second portion were normal in appearance. Esophageal evaluation revealed a 4 cm Zenker’s diverticulum oriented to the left of the endoscopic view. A distal cap attachment was used to delineate the upper esophageal anatomy, allowing for direct visualization of the diverticulum with a large opening absent of impacted debris. A submucosal bleb was created just proximal to the cricopharyngeal bar (CPB) with a saline/methylene blue mix. Submucosal dissection was performed using the I type hybrid knife on endocut q and spray coag settings to the diverticular side of the CP muscle and esophageal side until the entire CP muscle was exposed. Small, skeletonized submucosal vessels were treated with spray coagulation, followed by the complete myotomy of the CP muscle using I-knife described above. Esophageal mucosa was reexamined without evidence of injury, closing the defect with 4 endoclips without immediate or delayed complications. Barium swallow evaluation completed 48 hours postoperatively without evidence of perforation or filling defect associated with the presence of residual diverticulum. She remains asymptomatic at her two month follow up visit, leading to the removal of her PEG tube and continued successful PO tolerance.