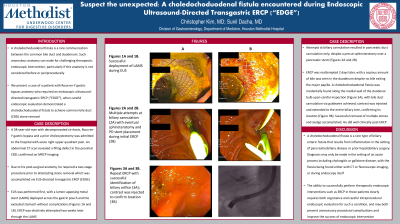 Introduction: A choledochoduodenal fistula is a rare communication between the common bile duct and duodenum. Such anomalous anatomy can make for challenging therapeutic endoscopic intervention, particularly if this anatomy is not considered before or periprocedurally. We present a case of a patient with Roux-en-Y gastric bypass anatomy who required an endoscopic ultrasound-directed transgastric ERCP (“EDGE”), when careful endoscopic evaluation demonstrated a choledochoduodenal fistula to achieve common bile duct (CBD) stone removal.

Case Description/Methods: A 58-year-old man with decompensated cirrhosis, Roux-en-Y gastric bypass and a prior cholecystectomy was admitted to the hospital with acute right upper quadrant pain. An abdominal CT scan revealed a filling defect in the proximal CBD, confirmed on MRCP imaging. Due to his post-surgical anatomy, he required a two-stage procedure prior to attempting stone removal which was accomplished via EUS-directed transgastric ERCP (EDGE). EUS was performed first, with a lumen-apposing metal stent (LAMS) deployed across the gastric pouch and the excluded stomach without complications. ERCP was electively attempted two weeks later through the LAMS. Attempts at biliary cannulation resulted in pancreatic duct cannulation only, despite a precut sphincterotomy over a pancreatic stent. ERCP was reattempted 2 days later, with a copious amount of bile was seen in the duodenum despite no bile exiting the major papilla. A choledochoduodenal fistula was incidentally found along the medial wall of the duodenal bulb upon careful inspection, with bile duct cannulation via guidewire achieved; contrast was injected and extended to the entire biliary tree, confirming its location. Successful removal of multiple stones and sludge accomplished. He did well clinically post-ERCP.

Discussion: A choledochoduodenal fistula is a rare type of biliary-enteric fistula that results from inflammation in the setting of pancreaticobiliary disease or prior hepatobiliary surgery. Diagnosis may only be made in the setting of an acute process including cholangitis or gallstone disease, with the fistula being found either with CT or fluoroscopic imaging, or during endoscopy itself. The ability to successfully perform therapeutic endoscopic interventions such as ERCP in these patients clearly requires both cognizance and careful intraprocedural endoscopic evaluation for such a condition, and may both prevent unnecessary procedural complications and improve the success of endoscopic intervention.