P2570 - An Unusual Presentation of a Rare Cause of Lower Gastrointestinal Bleeding: Cecal Dieulafoy’s Lesion Presenting as Melena 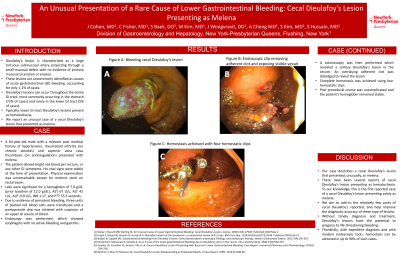 Case Description/Methods: A 64-year-old male with a relevant past medical history of hypertension, rheumatoid arthritis (on chronic steroids) and superior vena cava thrombosis (on anticoagulation) presented with melena. The patient denied bright red blood per rectum, or any other gastrointestinal symptoms. His vital signs were stable at the time of presentation. Physical examination was unremarkable except for melenic stool on rectal exam. Labs were significant for a hemoglobin of 7.0 g/dL (prior baseline of 12.0 g/dL), AST 67 U/L, ALT 43 U/L, ALP 219 U/L, INR 1.17, and PTT 55.3 seconds. Due to evidence of persistent bleeding, three units of packed red blood cells were transfused and a pantoprazole drip was initiated with suspicion of an upper GI source of bleed. Endoscopy was performed, which showed esophagitis with no active bleeding and gastritis. A colonoscopy was then performed which revealed a solitary Dieulafoy’s lesion in the cecum. An overlaying adherent clot was dislodged to reveal the lesion. Complete hemostasis was achieved using four hemostatic clips. Post procedural course was uncomplicated and the patient’s hemoglobin remained stable.