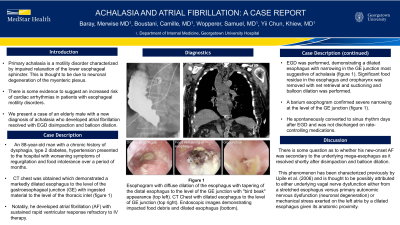 Introduction: Primary achalasia is a motility disorder characterized by impaired relaxation of the lower esophageal sphincter. This is thought to be due to neuronal degeneration of the myenteric plexus. Patients present with varying degrees of symptoms ranging from mild dysphagia to overt esophageal obstruction and even rupture. There is some evidence to suggest an increased risk of cardiac arrhythmias in patients with esophageal motility disorders. We present a case of an elderly male with a new diagnosis of achalasia who developed atrial fibrillation resolved with EGD disimpaction and balloon dilation.

Case Description/Methods: An 88-year-old man with a chronic history of dysphagia, type 2 diabetes, hypertension, and chronic pancreatitis presented to the hospital with worsening symptoms of regurgitation and food intolerance over a period of months. CT chest was obtained which demonstrated a markedly dilated esophagus to the level of the gastroesophageal junction (GE) with ingested material to the level of the thoracic inlet. Notably, he developed atrial fibrillation (AF) with sustained rapid ventricular response refractory to IV therapy. A nasogastric tube was unable to remove any debris with suction. EGD was performed, demonstrating a dilated esophagus with narrowing in the GE junction most suggestive of achalasia. Significant food residue in the esophagus and oropharynx was removed with net retrieval and suctioning and balloon dilation was performed. A barium esophagogram confirmed severe narrowing at the level of the GE junction. He spontaneously converted to sinus rhythm days after EGD and was not discharged on rate-controlling medications.

Discussion: Although definitive diagnosis is made by esophageal manometry, the patient’s symptomatology, evidence of food impaction on EGD, and bird beak appearance on barium esophagogram make the diagnosis of Achalasia most likely. There is some question as to whether his new-onset AF was secondary to the underlying megaesophagus as it resolved shortly after disimpaction and balloon dilation. This phenomenon has been characterized previously by Upile et al. (2006) and is thought to be possibly attributed to either impaired underlying vagal nerve function or mechanical stress exerted on the left atria by a dilated esophagus given its anatomic proximity.