P2444 - A Rare Cause for Dysphagia and Malignancy: Esophageal Neuroendocrine Tumor 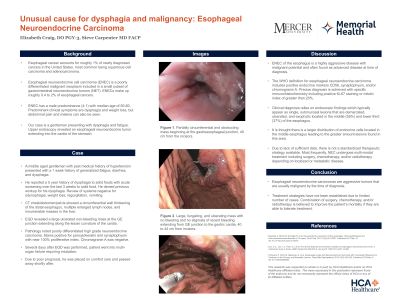 Introduction: Esophageal cancer accounts for roughly 1% of newly diagnosed cancers yearly in the United States with most common being squamous cell carcinoma (SCCA) and adenocarcinoma. Our case describes an esophageal neuroendocrine cell carcinoma (NEC), which is a malignant neoplasm included in a small subset, 0.04%, of gastrointestinal (GI) neuroendocrine tumors (NET). They are characterized by high malignant potential, rapid growth, and overall poor prognosis.

Case Description/Methods: A 59 year old man with history of hypertension presented with a 1 week history of fatigue, diarrhea, and dysphagia. He had a 5 year history of dysphagia to solid foods with acute worsening over the last 3 weeks. He denied abdominal pain, melena, weight loss. Labs revealed hemoglobin of 7.0, MCV 76.7, and iron deficiency anemia. CT scan showed circumferential wall thickening of the distal esophagus, multiple enlarged lymph nodes, and innumerable masses in the liver. EGD revealed a large ulcerated non-bleeding mass at the GE junction extending along the lesser curvature of the cardia. Pathology revealed poorly differentiated high grade neuroendocrine carcinoma. Stains were positive for pancytokeratin and synaptophysin with near 100% Ki-67 proliferative index. Chromogranin A was negative. Several days after the EGD, the patient acutely decompensated requiring intubation. Due to poor prognosis in the setting of multi-organ failure, he was placed on comfort care and passed away shortly after.

Discussion: Esophageal NECs are a rare cause of malignancy, contributing to 0.4 to 2% of esophageal cancers. NEC has a male predominance (4:1) with median age 50-60. Predominant clinical symptoms are dysphagia and weight loss but abdominal pain and melena can also be seen. Endoscopic findings are typically a single, submucosal lesion that is demarcated, ulcerated, and exophytic located in the middle (55%) and lower third (37%) of the esophagus. This is thought to be from a larger distribution of neuroendocrine cells located in the middle esophagus. One retrospective study also noted co-existence of SCC and adenocarcinoma in NEC on pathology. Unfortunately, the prognosis of esophageal NECs are poor due to advanced disease at time of diagnosis. Due to lack of sufficient data about esophageal NEC, there is not a standardized therapeutic strategy available. Most frequently, NEC undergoes multi-modal treatment including surgery, chemotherapy, and/or radiotherapy depending on localized or metastatic disease. 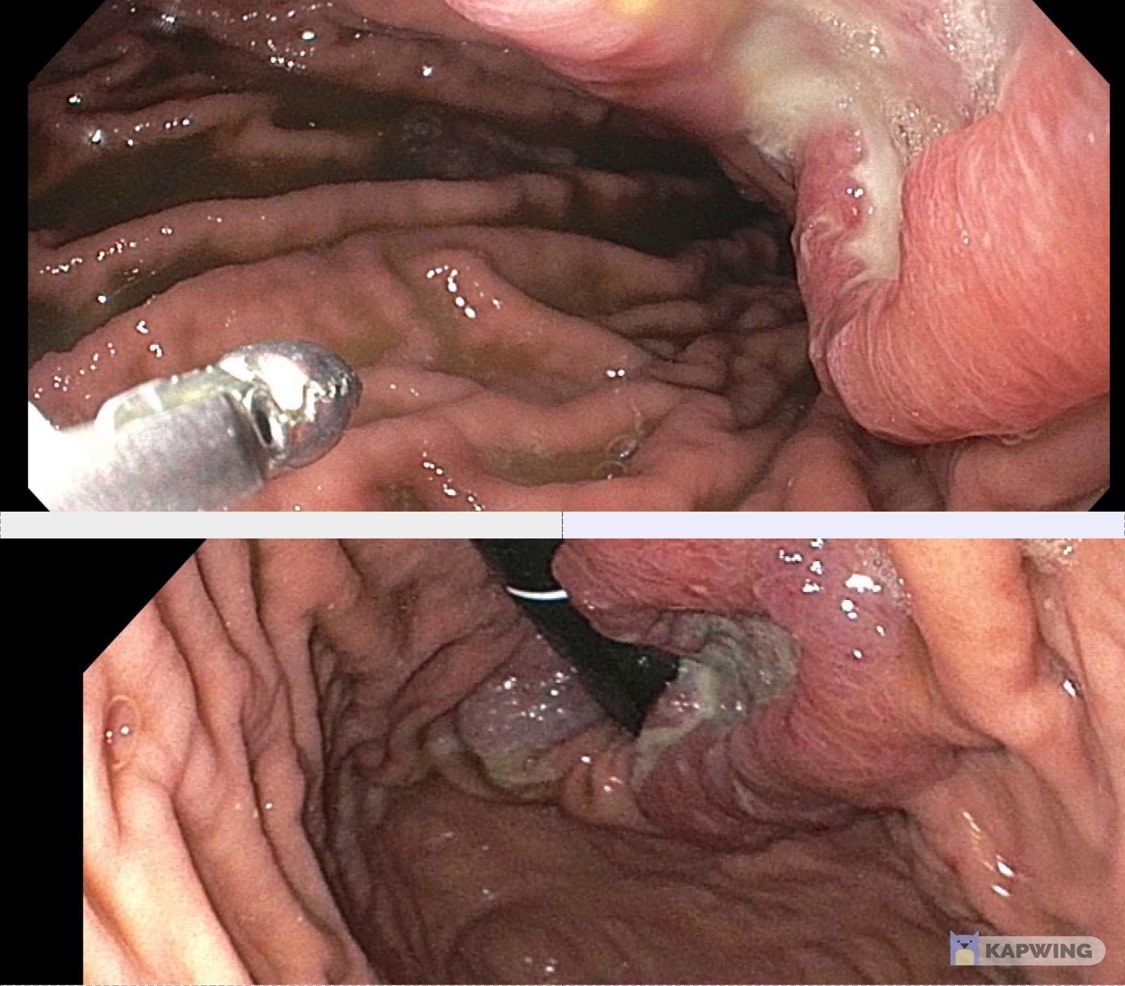 Figure: A: Large fungating and ulcerating mass with no evidence of bleeding or stigmata of recent bleeding
B. Partial circumferential mass extending along lesser curvature of cardia region