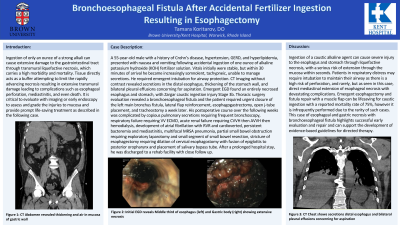 Introduction: Ingestion of only an ounce of a strong alkali can cause extensive damage to the gastrointestinal tract through transmural liquefactive necrosis, which carries a high morbidity and mortality. Tissue directly acts as a buffer attempting to limit the rapidly advancing necrosis resulting in complications such as esophageal perforation, mediastinitis, and death. Early endoscopy is critical to assess and grade the injuries to mucosa and provide prompt life-saving treatment.

Discussion: Ingestion of a caustic alkaline agent causes severe injury to the mucosa within seconds. Respiratory distress is a sign of perforation or direct mediastinal extension of esophageal necrosis with devastating complications. Emergent esophagectomy and fistula repair with a muscle flap is lifesaving however it is infrequently performed due to the rarity of such cases. This case of bronchoesophageal fistula highlights successful early evaluation and repair and can support the development of evidence-based guidelines for directed therapy.