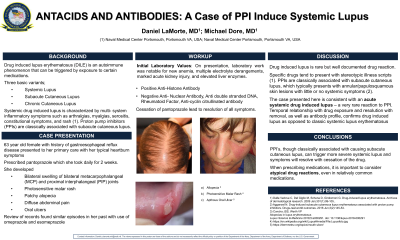 Case Description/Methods: A 63 year old female with history of gastroesophageal reflux disease (GERD) presented to clinic complaining of typical heartburn pain and globus sensation for which she was prescribed pantoprazole. After 2 weeks of daily use, she developed pain and swelling of bilateral metacarpophalangeal (MCP) and proximal interphalangeal (PIP) joints, photosensitive malar rash, patchy alopecia, 'gnawing' diffuse abdominal pain (different than GERD symptoms), and oral ulcers. Her pantoprazole was stopped, and 2 weeks later her symptoms resolved. Review of the her medical record revealed that she had prior exposure to 2 other PPI's in the past that both were associated with development of similar symptoms. Use of omeprazole caused pain and swelling of her right MCP joints, and several years later use of esomeprazole caused severe pain and swelling of the left elbow. In both cases, discontinuation of her PPI caused resolution of symptoms. Her labs were notable for positive anti histone antibody and negative ANA, dsDNA, RF, anti CCP.

Discussion: DILE has three basic variants; systemic, subacute cutaneous, and chronic cutaneous. The type of drug induced lupus and severity of symptoms is strongly associated with the specific drug of exposure. PPI's are most associated with subacute cutaneous DILE, although this remains an overall rare adverse reaction. Subacute cutaneous DILE presents with formation of annular or papulosquamous skin lesions and mild (if any) systemic symptoms. Our case is more consistent with systemic DILE. Review of literature reveals few case reports of systemic DILE from PPI use. Systemic DILE presents with multi-system involvement with constitutional symptoms, myalgias, arthralgias, and serositis. Symptoms resolve with withdrawal of the agent. The case above clearly demonstrates this illness script through multiple exposures to PPI. Classic SLE is ruled out in this case due to this temporal relationship with drug exposure, as well as her antibody profile positive for anti-histone and negative for other SLE-associated antibodies. This case highlights the importance of considering atypical drug reactions, even when prescribing relatively common medications.