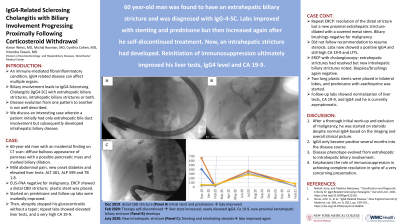 Case Description/Methods: A 60-year-old man was transferred to evaluate an incidental finding on CT scan: diffuse bulbous appearance of pancreas with a possible pancreatic mass and marked biliary dilation. He had mild abdominal pain, new onset diabetes and elevated liver tests: ALT 401, ALP 599 and TB 1.8. He underwent EUS-FNA which was negative for malignancy. ERCP showed a distal CBD stricture, and a plastic stent was placed. IgG4 level at this time was normal. He was started on prednisone and follow-up labs were markedly improved. However, at his next outpatient GI appointment, he was found to have abruptly stopped glucocorticoids without a taper, and his repeat labs showed elevated liver tests, and a very high CA 19-9. Due to concern for malignancy, he underwent another ERCP which demonstrated resolution of the distal stricture but noted a new proximal extrahepatic stricture, which was dilated with a covered metal stent. Biliary brushings were negative for malignancy. He did not follow our recommendation to resume steroids. Labs now showed a positive IgG4 and still-high CA 19-9 and LFTs. ERCP with cholangioscopy was then done, and at this time the extrahepatic strictures had resolved but new intrahepatic biliary strictures were present. Biopsies/brushings were again negative. Two long plastic stents were placed in bilateral lobes, and prednisone with azathioprine was started. Follow-up labs showed normalization of liver tests, CA 19-9, and IgG4 and he is currently asymptomatic.

Discussion: There are several interesting aspects to our case. Firstly, after a thorough initial work-up and exclusion of malignancy, he was started on steroids despite normal IgG4 based on the imaging and overall clinical picture. Interestingly, his IgG4 only became positive several months into the disease course. Additionally, his disease phenotype evolved from extrahepatic biliary to intrahepatic biliary involvement. Finally, this case emphasizes the role of immunosuppression in achieving complete resolution in spite of a very concerning presentation.