P2083 - A Puzzling Desquamative Rash in an Adult With Marasmus 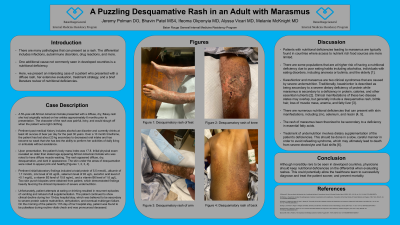 Introduction: There are many pathologies that can present as a rash. The differential includes infections, autoimmune disorders, drug reactions, and more. One additional cause not commonly seen in developed countries is a nutritional deficiency.

Case Description/Methods: A 55-year-old African American female presented with a diffuse, dry, flakey rash she had originally noticed on her ankles approximately 6 months prior to presentation. The character of the rash was painful, itchy, and would slough off when the patient wore tight clothing. Pertinent past medical history includes alcohol use disorder and currently drinks at least 40 ounces of beer per day for the past 30 years. Over a 10 month timeframe, the patient has lost about 23 kg secondary to decreased oral intake. Upon presentation, the patient’s body mass index of 17.8. Initial physical exam revealed an older than stated age appearing African American female with diffuse muscle wasting. The rash appeared diffuse, dry, desquamative, and dark in appearance. The skin under the areas of desquamation were noted to appear pink and healthy. Pertinent initial laboratory findings included a total protein of 5.5 mmol/L, albumin of 1.7 mmol/L, zinc level of 42 ug/dL, selenium level of 93 ug/L, ascorbic acid level of < 0.1 mg/dL, a vitamin B3 level of 15.8 ng/mL, and a vitamin B6 level of 1.6 ug/L. Unfortunately, patient attempts at eating or drinking resulted in recurrent episodes of vomiting and refusal of all supplementation. The patient continued to show clinical decline during her 10-day hospital stay, which was believed to be secondary to severe protein calorie malnutrition, dehydration, and eventual multi-organ failure. On the morning of the patient’s 11th day of her hospital stay, patient was found to be pulseless during routine vitals check and was pronounced deceased.