P2086 - Acquired Double Pylorus: A Case of a Fast and Indolent Course 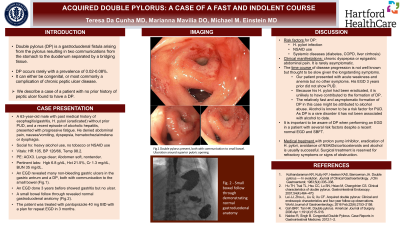 Introduction: Double pylorus (DP) is a gastroduodenal fistula arising from the pylorus resulting in two communications from the stomach to the duodenum separated by a bridging tissue. DP occurs rarely with a prevalence of 0.02-0.08%. It can either be congenital, or most commonly a complication of chronic peptic ulcer disease (PUD). We describe a case of a patient with no prior history of peptic ulcer found to have a DP.

Case Description/Methods: A 63-year-old male with past medical history of esophagitis/gastritis, H. pylori (eradicated), recent alcoholic hepatitis, presented with progressive fatigue. He denied abdominal pain, nausea/vomiting, dyspepsia, hematochezia/melena or dysphagia. He had a history of heavy alcohol use but no tobacco or NSAID use. On admission, the patient was hemodynamically stable. Laboratory tests showed Hgb 6.8 g/dL, Hct 21.5%, Cr 1.3 mg/dL, BUN 35 mg/dL. An esophagogastroduodenoscopy (EGD) revealed many non-bleeding gastric ulcers in the gastric antrum and a DP, both with communication to the small bowel (Fig.1A). A small bowel follow through (SBFT) revealed normal gastroduodenal anatomy (Fig.1B). An EGD done 3 years before showed gastritis but no ulcer. The patient was treated with pantoprazole 40 mg BID with a plan for repeat EGD in 3 months.

Discussion: Several risk factors are thought to contribute to the development of DP including H. pylori infection, NSAID use, and systemic diseases (diabetes, COPD, liver cirrhosis). It presents with chronic dyspepsia or epigastric abdominal pain and is rarely asymptomatic. The time course of disease progression is not well known but thought to be slow given the longstanding symptoms. Our patient presented with acute weakness and anemia but no other symptoms. Moreover, his EGD done 3 years before did not show PUD. Because his H. pylori had been eradicated, it is unlikely to have contributed to the formation of DP. The relatively fast and asymptomatic formation of DP in this case might be attributed to alcohol abuse. Alcohol is known to be a risk factor for PUD. As DP is a rare disorder it has not been associated with alcohol to date. It is important to be aware of DP when performing an EGD in a patient with several risk factors despite a recent normal EGD and SBFT. Medical treatment with proton pump inhibitor, eradication of H. pylori, avoidance of NSAIDs/corticosteroids and alcohol is usually successful. Surgical treatment is reserved for refractory symptoms or signs of obstruction.