P1973 - A Case of Duodenal Pseudomelanosis 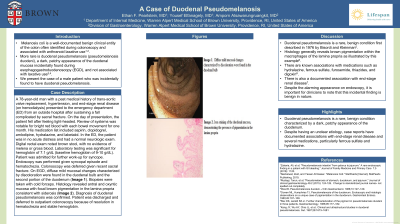 Introduction: Melanosis coli is a well-documented benign clinical entity of the colon often identified during colonoscopy and associated with anthranoid laxative use. Rarer is pseudomelanosis duodeni, a dark, patchy appearance of the duodenal mucosa incidentally found during esophagogastroduodenoscopy (EGD), and not associated with laxative use. We present a case of a man who was incidentally found to have duodenal pseudomelanosis.

Case Description/Methods: A 78-year-old man with a past medical history of trans-aortic valve replacement, hypertension, and end-stage renal disease (on hemodialysis) presented to the emergency department (ED) from an outside hospital after sustaining a fall complicated by sacral fracture. On the day of presentation, the patient fell after feeling light-headed. Review of systems was notable for bright red blood with each bowel movement for one month. His medication list included aspirin, clopidogrel, amlodipine, hydralazine, and labetalol. In the ED, the patient was in no acute distress and had a normal neurologic exam. Digital rectal exam noted brown stool, with no evidence of melena or gross blood. Laboratory testing was significant for hemoglobin of 7.1 g/dL (baseline hemoglobin of 9-10 g/dL). Patient was admitted for further work-up for syncope. Endoscopy was performed given syncopal episode and hematochezia. Colonoscopy was deferred given recent sacral fracture. On EGD, diffuse mild mucosal changes characterized by discoloration were found in the duodenal bulb and the second portion of the duodenum (Image A). Biopsies were taken with cold forceps. Histology revealed antral and oxyntic mucosa with focal brown pigmentation in the lamina propria consistent with siderosis (Image B). Diagnosis of duodenal pseudomelanosis was confirmed. Patient was discharged and deferred to outpatient colonoscopy because of resolution in hematochezia and stable hemoglobin.

Discussion: Duodenal pseudomelanosis is a rare, benign condition first described in 1976 by Bisordi and Kleinman. Histology generally reveals brown pigmentation within the macrophages of the lamina propria as illustrated by this example. There are known associations with medications such as hydralazine, ferrous sulfate, furosemide, thiazides, and digoxin. There is also a documented association with end-stage renal disease. Despite the alarming appearance on endoscopy, it is important for clinicians to note that this incidental finding is benign in nature.

Figure: Image A. Diffuse mild mucosal changes characterized by discoloration were found in the duodenal bulb
Image B. Iron staining of the duodenal mucosa, demonstrating the presence of pigmentation in the lamina propria