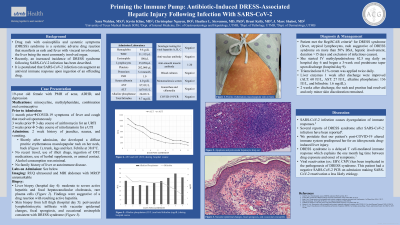 Introduction: Drug rash with eosinophilia and systemic symptoms (DRESS) syndrome is a systemic adverse drug reaction that manifests as rash and fever with visceral involvement, most commonly hepatic and renal. It typically develops within 2-6 weeks of drug exposure or weeks after cessation. An increased incidence of DRESS syndrome in the context of recent SARS-CoV-2 infection has been identified. This is postulated to be a result of an augmented antiviral immune response upon ingestion of an offending agent. Here we present a case of DRESS syndrome following recent SARS-CoV-2 infection.

Case Description/Methods: A 19-year-old female with a history of outpatient SARS-CoV-2 infection one month prior presented with a two-week history of nausea, vomiting, and jaundice after treatment with azithromycin and nitrofurantoin for upper respiratory and urinary tract infections. She was febrile to a maximum temperature of 38.8ºC. Physical exam revealed normal vital signs, scleral icterus, perioral and periorbital edema, and a diffuse pruritic reticular rash with areas of confluence and macules on >50% of body surface area. Transaminases were elevated (AST 873 IU/L; ALT 1078 IU/L). Leukocytosis (31,112/mL) with eosinophilia and atypical lymphocytes was observed. Serologic testing for viral hepatitis A, B, and C was negative. Mononucleosis screen was negative. Screening for other metabolic or autoimmune etiologies of liver injury was negative. Liver biopsy on hospital day 4 showed active hepatitis with evidence suggestive of a drug reaction. Skin biopsy from the left thigh on hospital day 5 showed perivascular lymphohistiocytic infiltrate with vacuolar epidermal changes, focal spongiosis, and occasional eosinophils consistent with DRESS syndrome. She was treated with prednisone with significant improvement. Full resolution of the elevated liver enzymes and rash was observed within two weeks. 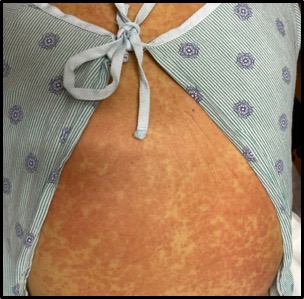