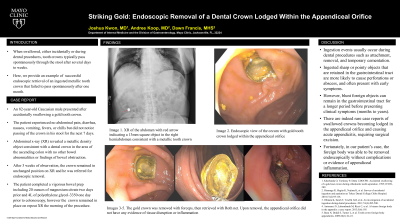 Introduction: Ingested sharp or pointy objects that are retained in the gastrointestinal tract are more likely to cause perforations or abscess, but blunt foreign objects can remain in the gastrointestinal tract for a much longer period of time before presenting with clinical symptoms. Here, we present the case of an accidentally ingested tooth crown that became lodged in a patient's appendiceal orifice, preventing spontaneous passage.

Case Description/Methods: An 82-year-old man with no prior gastrointestinal history presented after accidentally swallowing his gold tooth crown. The patient experienced no abdominal pain, diarrhea, nausea, vomiting, fevers, or chills and an abdominal x-ray (XR) revealed a metallic object consistent with a dental crown in the right lower hemiabdomen. After 4 weeks of observation, the crown remained in unchanged position on XR and he was referred for endoscopic removal. The patient completed a vigorous bowel prep including 20 ounces of magnesium citrate and 4L of polyethylene glycol-3350 before colonoscopy in the hopes this would facilitate passage, however the crown remained in place on XR the morning of the procedure. Colonoscopy demonstrated a gold tooth crown lodged in the appendiceal orifice, which was dislodged with forceps and retrieved with a net. Upon removal, the appendiceal orifice did not have any evidence of tissue disruption or inflammation.

Discussion: When swallowed, either incidentally or during dental procedures, tooth crowns typically pass spontaneously through the stool after several days to weeks. Rarely, swallowed crowns have become lodged in the appendiceal orifice causing acute appendicitis. Luckily, there was no evidence of appendiceal inflammation or clinical symptoms in our patient's case. This case illustrates the successful endoscopic retrieval of an ingested metallic tooth crown that failed to pass spontaneously after 1 month. 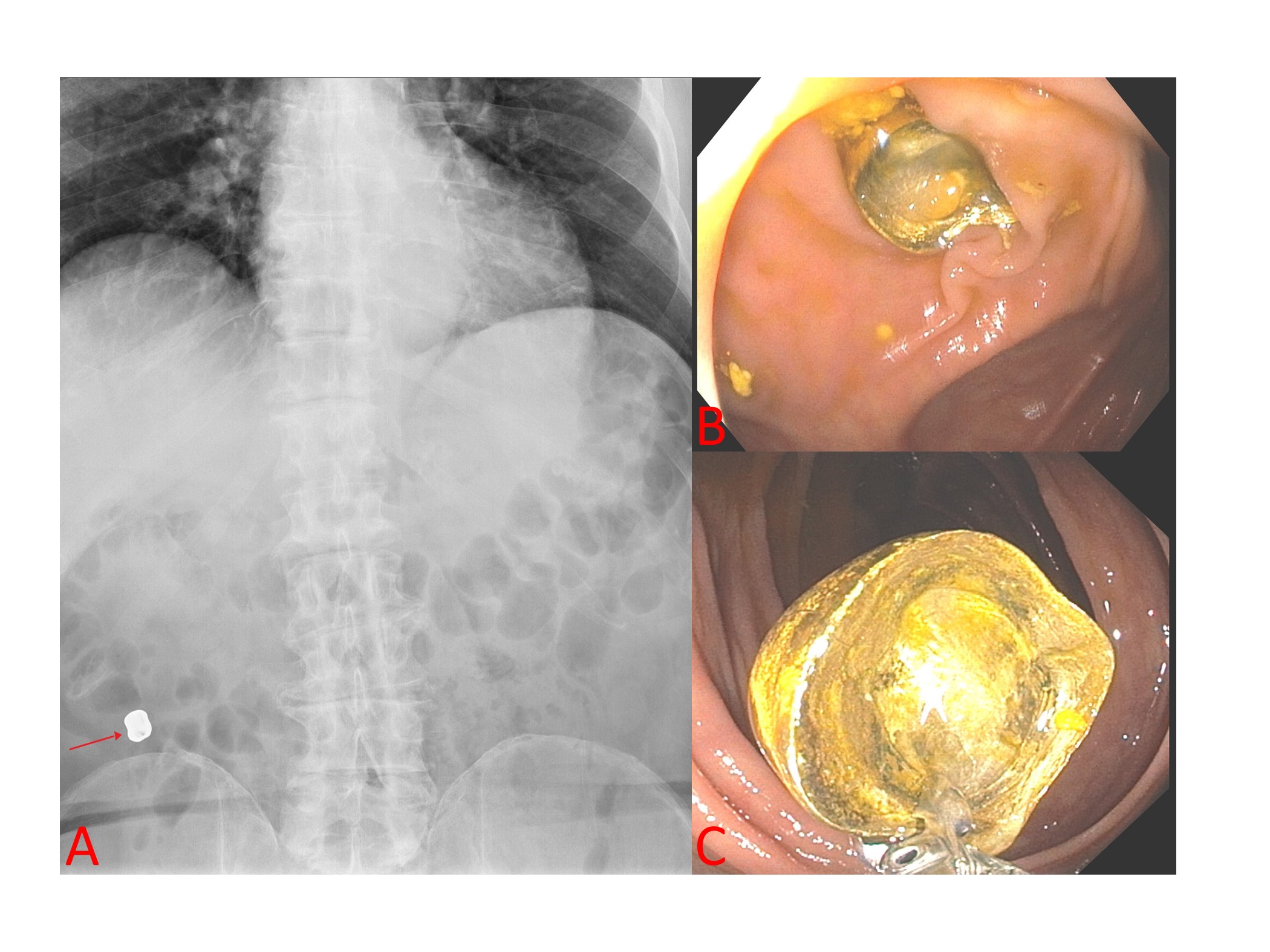 Figure: Figure 1. X-ray and colonoscopy images .Figure 1A shows XR of the abdomen with red arrow indicating a 13mm square object in the right hemiabdomen consistent with a metallic tooth crown. Figure 2B shows a view of the cecum with a gold tooth crown lodged within the appendiceal orifice. Figure 3B shows the tooth crown after removal with forceps.