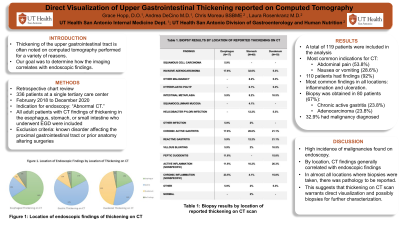 Introduction: Gastrointestinal wall thickening is a nonspecific, variably reported finding on computed tomography (CT) with no specific guidelines for follow up or management. Our aim was to determine how thickening of the proximal gastrointestinal tract seen on CT correlated with esophagoduodenoscopy (EGD) findings.

Methods: A retrospective chart review was conducted on 336 patients from February 2018 to December 2020 at a single tertiary care center. The patient list was obtained from ProVation, a reporting procedural software, using the indication “Abnormal CT.” All adult patients with CT findings of “thickening” in the esophagus, stomach, or small intestine who underwent subsequent EGD were included in analysis. Patients were excluded if they had a known disorder affecting the proximal gastrointestinal tract or had prior anatomy altering surgeries in the area of reported thickening.

Discussion: By location, CT findings generally correlated with endoscopic findings, though there were several incidental findings. This highlights that direct visualization is able to detect findings outside of where CT can.

In almost all locations where biopsies were obtained, there was pathology to be reported, as well as a high incidence of malignancy. This suggests that thickening on CT scan warrants direct visualization and possibly biopsies for further characterization.


Table: Table 1. BIOPSY RESULTS BY LOCATION OF REPORTED THICKENING ON CT
*Due to multiple findings in each location, cumulative findings may be greater than 100%