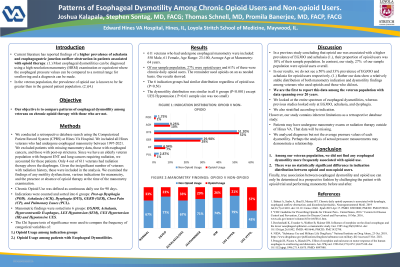 Introduction: Current literature suggests that there is a higher prevalence of esophagogastric junction outflow obstruction and achalasia in patients with chronic opioid use (Babaei A, et. al 2019, Dowlatshahi K, et al. 1985, Penagini R, et. al 1996). According to the 2018 National Survey on Drug Use and Health, the prevalence of chronic opioid use is far greater in the veteran population than in the general patient population. This will be the first paper to report esophageal dysmotility findings in the veteran population.

Methods: The study was conducted with Retrospective database analysis using data from the Veterans Affairs Computerized Patient Record System with a sample of veteran patients from 1997-2021. All veteran patients referred for esophageal manometry for various indications were included. Veterans who were unable to complete the study or had mixed manometry data were excluded. Data was organized and analyzed using Excel.

Results: Of the 605 veterans who met the inclusion criteria, (544 male, 61 female), (age range 35-102), (avg. age at time of procedure: 63), we compiled a distribution of indication and impressions for high-resolution manometry. Of these patients, 59 were chronic opioid users. Overall, indications were similar in the opioid user and non-opioid user groups, except for a 5% increase in chest pain among opioid users. See Figures 1-3. The top three manometric findings were EGJOO, Jackhammer Esophagus, and UES Incomplete Relaxation in both chronic opioid users and non-opioid veteran users. See Figures 2-4.

Discussion: This is the first study comparing patterns of esophageal dysmotility among veterans (avg. age =63) with chronic opioid use and those without opioid use. Unlike other studies, this study examined a population across 24 years. While it is current knowledge that there is a higher percentage of chronic opioid usage among veterans, the majority of our veterans presenting for esophageal manometry were surprisingly not opioid users. While the indications were similar in both groups, there was a slight increase in presentation with chest pain among chronic opioid users. In our population, there was no increase in the incidence of EGJOO and Jackhammer Esophagus unlike the prior reports. These findings may be in part due to the nature of retrospective database analysis not capturing non-VA prescription of opioids. This is a preliminary report of an ongoing study, and additional data will presented at ACG 2021.