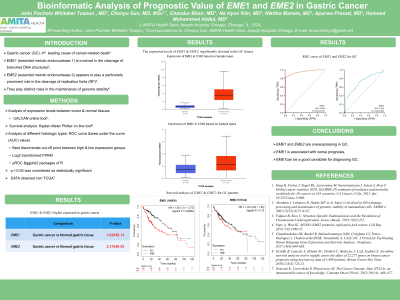 Introduction: As the fourth leading cause cancer-associated death, gastric cancer (GC) is a common malignant tumor worldwide. EME1 (essential meiotic endonuclease 1) is involved in the cleavage of branched DNA structures, especially those arising during stalled DNA replication, and EME2 (essential meiotic endonuclease 2) appears to play a particularly prominent role in the cleavage of replication forks (RF). They are thought to play distinct roles in the maintenance of genome stability. Therefore, this study was conducted to explore the potential prognostic and diagnostic value of EME1 and EME2 in Gastric Cancer.

Methods: Analysis of different expression levels of EME1 and EME2 between tumor and normal tissues was assessed via UALCAN online tool by using students’ t-test with p-value < 0.05 being considered as statistically significant. Survival analysis was conducted via Kaplan-Meier Plotter on line tool. The best discriminate cut-off point between the high and low expression groups was assessed by the ROC curve and area under the curve (AUC) values for EME1 and EME2. Log2 transformed FPKM was used. R software by using pROC and ggplot2 packages were used. Data were obtained from The Cancer Genome Atlas (TCGA).

Discussion: EME1 and EME2 are overexpressed in GC. EME1 is associated with worse prognosis, and it can be a good candidate for diagnosing GC. 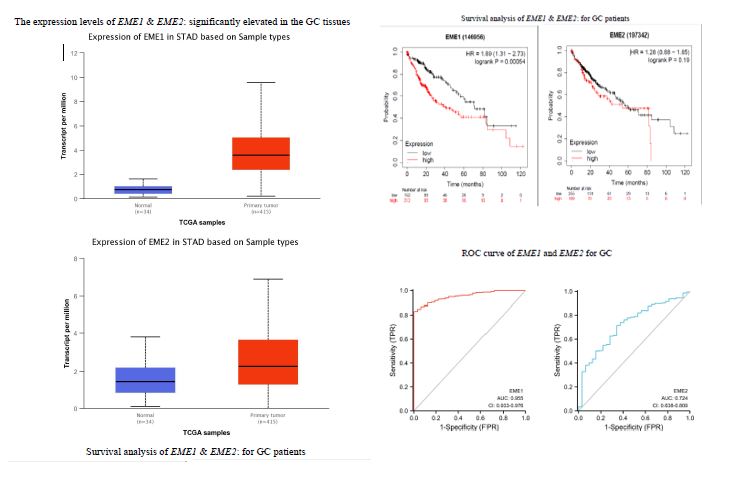