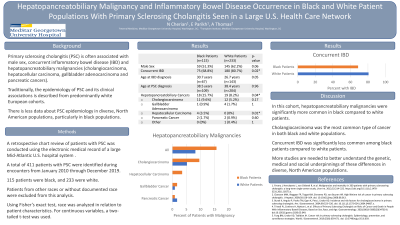 Methods: A retrospective chart review of patients with PSC was conducted using the electronic medical record of a large Mid-Atlantic U.S. hospital system. A total of 411 patients with PSC were identified during encounters from January 2010 through December 2019. Of these, 115 patients were black and 233 were white. Patients from other races or without documented race were excluded from this analysis. Using Fisher’s exact test, race was analyzed in relation to patient characteristics. For continuous variables, a two-tailed t-test was used.

Discussion: In this cohort of PSC patients in a large Mid-Atlantic U.S. hospital system, hepatopancreatobiliary malignancies were significantly more common in black compared to white patients. Cholangiocarcinoma was the most common type in both black and white populations. Concurrent IBD was significantly less common among black patients compared to white patients. More studies are needed to better understand the genetic, medical and social underpinnings of these differences in diverse North American populations.