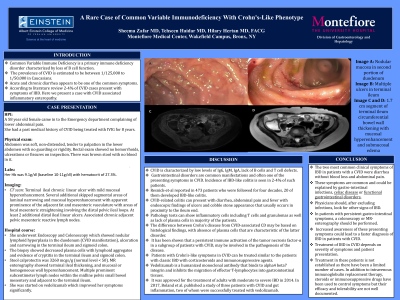 Introduction: Common Variable Immune Deficiency (CVID) is a primary immune deficiency disorder characterized by loss of B cell function. The prevalence of CVID is estimated to be between 1/125,000 to 1/50,000 in Caucasians. Acute and chronic diarrhea appears to be one of the common symptoms. According to literature review 2-4% of CVID cases present with symptoms of IBD. Here we present a case with CVID associated inflammatory enteropathy.

Case Description/Methods: A 58 year old female came in to the Emergency Department complaining of lower abdominal pain. She had a past medical history of CVID being treated with intravenous immunoglobulin (IVIG) for 8 years. Physical exam revealed tenderness in the lower abdomen. Rectal exam was normal. Her Hemoglobin was 9.1g/dl (baseline 10-11g/dl) with hematocrit of 27.3%. She underwent Endoscopy and Colonoscopy which showed nodular lymphoid hyperplasia in the duodenum (CVID manifestation), ulceration and narrowing in the terminal ileum and sigmoid colon. The biopsy showed decreased plasma cells with lymphoid aggregates and evidence of cryptitis in the terminal ileum and sigmoid colon. Stool calprotectin was 3260 mcgs/g (normal level < 50). MR enterography showed terminal ileal thickening. She was started on vedolizumab which improved her symptoms significantly.

Discussion: CVID is characterized by low levels of immunoglobulins, lack of B cells and T cells defects. GI disorders are common manifestations in CVID. Incidence of IBD-like colitis is seen in 2-4% of such patients. Resnick-et-al reported in 473 patients who were followed for four decades, 20 of them developed IBD-like colitis. CVID-related colitis presents with diarrhea, abdominal pain and fever with endoscopic findings of ulcers that usually occurs in the terminal ileum. Pathology shows T cells, granulomas and lack of plasma cells in the majority of the patients. The difference between Crohn's disease from CVID-associated CD is based on histological findings, with absence of plasma cells that are characteristic of the latter disorder. Patients with Crohn’s-like symptoms in CVID can be treated similarly to the patients with classic IBD with corticosteroids and immunosuppressive agents. Vedolizumab is a humanized monoclonal antibody that binds to alpha4 beta7 integrin and inhibits the migration of effector T-lymphocytes into gastrointestinal tissue. In 2017, Boland et al. published a study of three patients with CVID and gut inflammation, two of whom were successfully treated with vedolizumab. 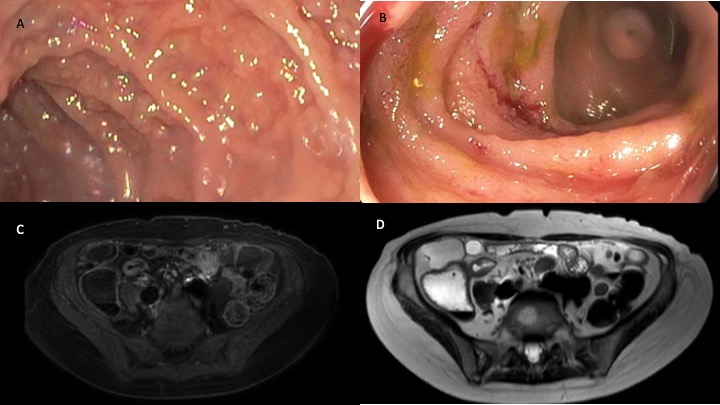