P0616 - The Furry Colon: A Diagnostic Dilemma of Intestinal Spirochetosis 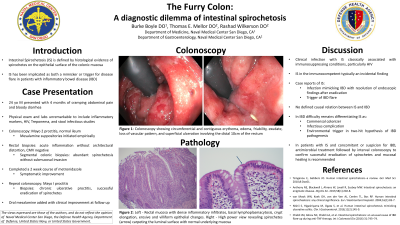 Introduction: Intestinal spirochetosis (IS) is defined by histological evidence of spirochetes on the apical membrane of the colorectal mucosa. IS has been described as an incidental finding, but also implicated as cause for disease flare in the setting of inflammatory bowel disease (IBD); its pathogenic significance remains unclear.

Case Description/Methods: A 24-year-old healthy male presented to clinic with 4 months of cramping abdominal pain, increased stool frequency and bloody diarrhea. He denied high risk infectious exposures. Physical exam and lab work, including stool infectious studies and inflammatory markers, were unremarkable. Colonoscopy demonstrated contiguous circumferential Mayo II inflammation involving the distal 10cm of the rectum with abrupt transition to normal mucosa throughout the remainder of the colon and terminal ileum. He was empirically started on mesalamine suppositories due to suspicion for ulcerative proctitis, however, rectal biopsies showed acute inflammation without architectural distortion. Segmental colonic biopsies were without inflammation, but notable for abundant spirochetosis without submucosal invasion. Treponema and HIV testing were negative. He completed a two-week course of metronidazole. Six weeks after index colonoscopy his abdominal pain resolved and stools were well-formed with occasional blood streaking. Follow up colonoscopy demonstrated endoscopic improvement, but persistent Mayo I disease involving the distal 5cm of the rectum. Segmental colonic biopsies showed spirochete eradication, however, rectal biopsies demonstrated chronic inflammatory changes consistent with a diagnosis of ulcerative proctitis. Oral mesalamine was added and the patient showed clinical improvement at follow up.

Discussion: IS is classically associated with clinical infection in those with immunosuppressing conditions, particularly HIV, but often an incidental finding in the immunocompetent. Case reports have described IS infection as a mimicker of IBD, however, a causal relationship between IS and IBD has not been established. In our patient, there was persistent chronic active proctitis despite spirochete eradication consistent with ulcerative proctitis. In this patient, and others, it remains difficult to differentiate IS as commensal colonization, infectious complication, or environmental trigger in the two-hit hypothesis of IBD pathogenesis; further study is warranted.