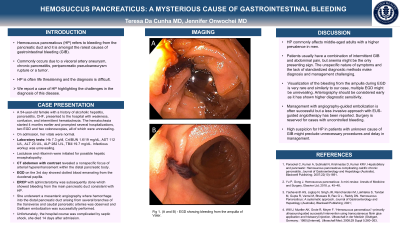 Introduction: Hemosuccus pancreaticus (HP) refers to bleeding from the pancreatic duct and it is amongst the rarest causes of gastrointestinal bleeding (GIB). Commonly occurs due to a visceral artery aneurysm, chronic pancreatitis, peripancreatic pseudoaneurysm rupture or a tumor. HP is often life threatening and the diagnosis is difficult. We report a case of HP highlighting the challenges in the diagnosis of this disease.

Case Description/Methods: A 54-year-old female with a history of alcoholic hepatitis, pancreatitis, CHF, presented to the hospital with weakness, confusion, and intermittent hematochezia. The hematochezia started 4 months earlier and prompted several hospitalizations, two EGD and two colonoscopies, all of which were unrevealing. On admission, her vitals were normal, laboratory tests showed Hb 7.3 g/dl, Crt/BUN 1.6/19 mg/dL, AST 112 U/L, ALT 23 U/L, ALP 282 U/L, TBili 19.7 mg/dL. Infectious workup was unrevealing. Lactulose and rifaximin were initiated for possible hepatic encephalopathy. A CT abdomen with contrast revealed a nonspecific focus of arterial hyperenhancement within the distal pancreatic body. An EGD on the 3rd day showed clotted blood emanating from the duodenal papilla. ERCP with sphincterotomy was subsequently done which showed bleeding from the main pancreatic duct consistent with HP. She underwent a mesenteric angiography where hemorrhage into the distal pancreatic duct arising from several branches of the transverse and caudal pancreatic arteries was observed and Gelfoam embolization was successfully performed. Unfortunately, the hospital course was complicated by septic shock, she died 14 days after admission.

Discussion: HP commonly affects middle age adults with a higher prevalence in men. Patients usually have a combination of intermittent GIB and abdominal pain, but anemia might be the only presenting sign. The unspecific nature of symptoms and the lack of standardized diagnostic methods make diagnosis and management challenging. Visualization of the bleeding from the ampulla during EGD is very rare and similarly to our case, multiple EGD might be unrevealing. Arteriography should be considered early as it has shown higher diagnostic sensitivity. Management with angiography-guided embolization is often successful but a less invasive approach with EUS-guided angiotherapy has been reported. Surgery is reserved for cases with uncontrolled bleeding. High suspicion for HP in patients with unknown cause of GIB might preclude unnecessary procedures and delay in management.

Figure: Fig 1. EGD showing bleeding from the ampulla of Vater