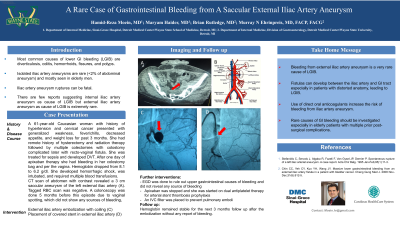 Case Description/Methods: A 61-year-old Caucasian woman with history of hypertension and cervical cancer presented with generalized weakness, fever/chills, decreased appetite, and weight loss since past 3 months. Past surgical/medical treatment for her cervical cancer included hysterectomy and radiation therapy followed by multiple colectomies with colostomy. This was complicated later with ureteral stricture status post bilateral nephrostomy tubes and recto-vaginal fistula. On the current admission, she was treated for sepsis secondary to pneumonia and UTI. She subsequently developed a left femoral vein thrombosis and was started on heparin and transitioned to apixaban. After one day on apixaban she had a large volume of blood in her colostomy bag and per the vagina. Hemoglobin dropped from 8.1 to 6.2 mg/dl. She developed hemorrhagic shock, was intubated, and required multiple blood transfusions. CT scan of abdomen with contrast revealed a 3 cm saccular aneurysm of the left external iliac artery. Tagged RBC scan was negative. Given the proximity of the aneurysm with bowel, external iliac artery was embolized with coiling and a covered stent was placed. EGD was performed later to rule out upper gastrointestinal causes of bleeding and did not show any potential sources of bleeding. A colonoscopy was done 5 months before this episode due to vaginal spotting, which did not show any sources of bleeding, therefore not repeated this time. Apixaban was stopped and she was started on dual antiplatelet therapy for her stent. An inferior vena cava filter was placed to prevent pulmonary emboli. Her hemoglobin remained stable for the next 3 months follow up after the embolization without any report of bleeding.

Discussion: External iliac artery aneurysm bleeding is very rare, and fistulas can develop between the iliac artery and GI tract especially in patients with distorted anatomy, leading to LGIB. Use of direct oral anticoagulants increases the risk of aneurysm bleeding and resultant LGIB. Rare causes of GI bleeding should be investigated especially in elderly patients with multiple prior post-surgical complications.