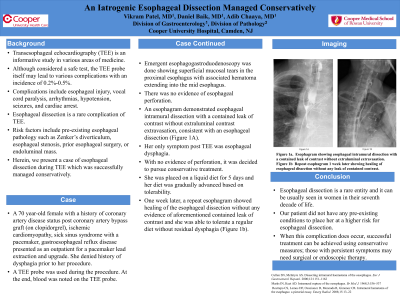 Introduction: Transesophageal echocardiography (TEE) is an informative study used in various areas of medicine. Although it is considered a safe test, the TEE probe can lead to various complications, with an incidence of 0.2% - 0.5%. Some complications include esophageal injury, vocal cord paralysis, arrhythmias, hypotension, seizures, and cardiac arrest. Esophageal dissection is a rare complication that could be seen in TEE. Risk factors include pre-existing esophageal pathology such as Zenker’s diverticulum, esophageal stenosis, prior esophageal surgery, or endoluminal mass. Herein, we present a case of esophageal dissection after TEE which was successfully managed conservatively.

Case Description/Methods: A 70 year-old female with a history of coronary artery disease status post coronary artery bypass graft surgery (on clopidogrel), ischemic cardiomyopathy, sick sinus syndrome with a pacemaker and gastroesophageal reflux disease presented for a pacemaker lead extraction and upgrade to cardiac resynchronization therapy defibrillator device. She denied any history of dysphagia prior to the procedure. During the procedure she underwent a TEE. At the conclusion of the procedure, there was blood noted on the TEE probe. She subsequently underwent an emergent esophagogastroduodenoscopy which showed superficial mucosal tears in the proximal esophagus with an associated hematoma extending into the mid esophagus. There was no evidence of esophageal perforation. An esophagram was done which demonstrated esophageal intramural dissection with a contained leak of contrast without extraluminal contrast extravasation consistent with an esophageal dissection (Figure 1A). Her only symptom post TEE was esophageal dysphagia. With no evidence of perforation, it was decided to pursue conservative treatment. She was placed on a liquid diet for 5 days and her diet was gradually advanced based on tolerability. One week later, a repeat esophagram showed healing of the esophageal dissection without any evidence of the aforementioned contained leak of contrast and she was able to tolerate a regular diet without dysphagia (Figure 1B).

Discussion: Esophageal dissection is a rare entity and it can be usually seen in women in their seventh decade of life. Our patient did not have any pre-existing conditions to place her at a higher risk for esophageal dissection. When this complication does occur, successful treatment can be achieved using conservative measures; those with persistent symptoms may need surgical or endoscopic therapy. 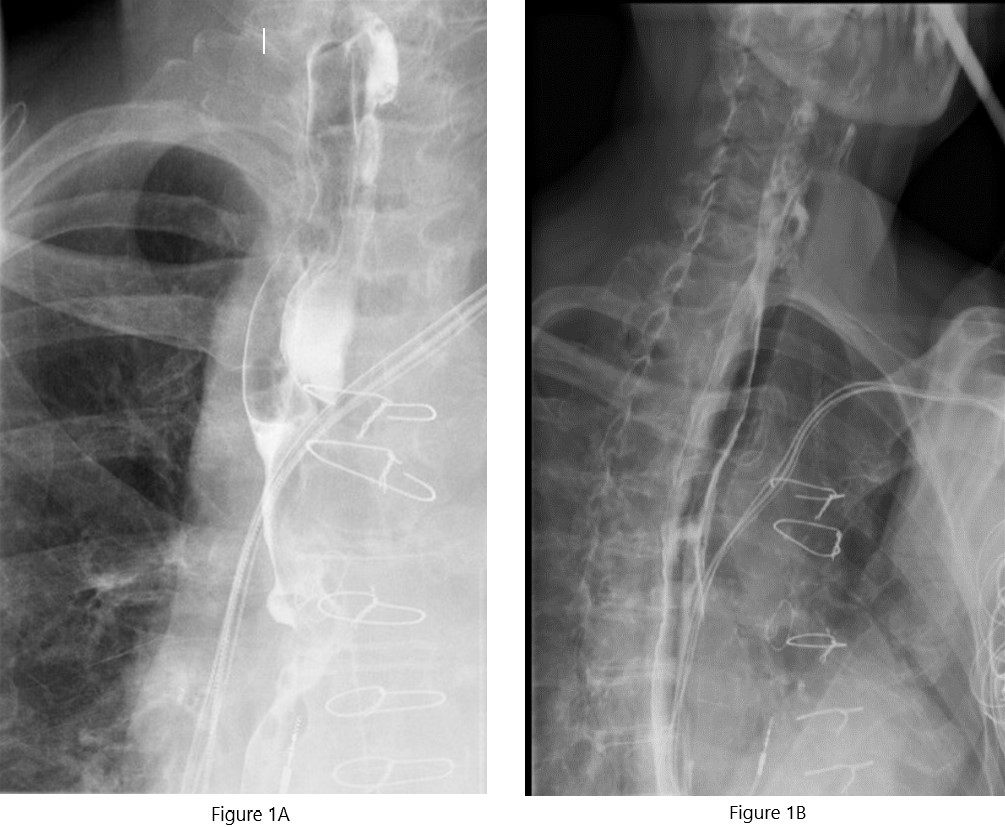