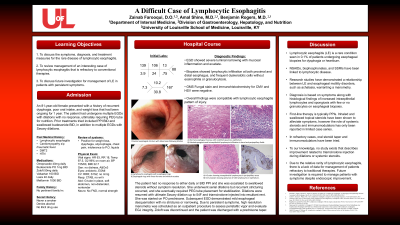 Introduction: Lymphocytic esophagitis (LE) is a rare condition seen in 0.1% of patients undergoing esophageal biopsies for dysphagia or heartburn. Incidence appears to be on the rise in elderly and female populations. Of unclear etiology, diagnosis is based on histological findings of increased intraepithelial lymphocytes and spongiosis with few or no granulocytes on esophageal biopsies, along with symptoms. We report a case of LE not responding to traditional treatments, ultimately requiring serial dilations and intramucosal triamcinolone injection.

Case Description/Methods: An 81-year-old female presented with 1-year history of recurrent dysphagia, poor oral intake and weight loss. She underwent multiple EGDs which showed severe luminal narrowing with mucosal inflammation and exudate. Biopsies showed lymphocytic infiltration at both proximal and distal esophagus, and frequent dyskeratotic cells without eosinophilia or granulocytosis. With no response to either daily or BID PPI, she was escalated to swallowed steroids without symptom resolution. She underwent serial dilations but recurrent stricturing occurred, requiring PEG tube placement for stabilization. Dilations were resumed with ultimate Savary dilation up to 54F and triamcinolone injected into resultant rent. Subsequent EGD demonstrated mild esophageal desquamation with no strictures or narrowing. Due to persistent symptoms, high resolution manometry is scheduled to assess peristaltic vigor and evaluate EGJ integrity. She had previously been taking an SSRI, which was held.

Discussion: Our case highlights the challenging scenario of LE not fully responding to conventional therapies. PPIs, typically BID, are often employed first in managing LE since reflux may mediate some cases. Inhaled and swallowed topical steroids have been shown to alleviate symptoms in subsets of LE, however the role of systemic steroids and immunomodulators has only been reported in limited case series. Medications such as NSAIDs, bisphosphonates, SSRIs have been linked to LE. Studies have also demonstrated a relationship between LE and esophageal motility disorders, such as achalasia, and manometry is warranted in LE patients not responding to therapy. However, no studies exist to our knowledge describing improvement related to triamcinolone injection during dilations, and our case highlights challenges faced when PPI and topical steroids fail. Future investigation is required to manage patients with symptoms despite endoscopic improvement.