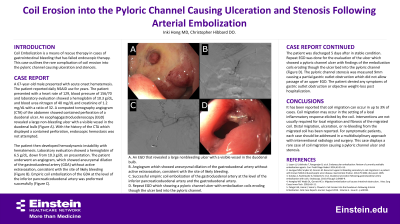 Introduction: Coil Embolization is a means of rescue therapy in cases of gastrointestinal bleeding that has failed endoscopic therapy. This case outlines the rare complication of coil erosion into the pyloric channel causing ulceration and stenosis.

Case Description/Methods: A 67-year-old male presented with acute onset hematemesis. The patient reported daily NSAID use for years. The patient presented with a heart rate of 129, blood pressure of 156/70 and laboratory evaluation showed a hemoglobin of 10.3 g/dL, without prior baseline hemoglobin, and blood urea nitrogen of 40 mg/dL and creatinine of 1.2 mg/dL with a ratio of 32. A computed tomography angiogram (CTA) of the abdomen showed contained perforation of a duodenal ulcer. An esophagogastroduodenoscopy (EGD) revealed a large nonbleeding ulcer with a visible vessel in the duodenal bulb (Figure A). With the history of the CTA which displayed a contained perforation, endoscopic hemostasis was not attempted.

The patient then developed hemodynamic instability with hematemesis. Laboratory evaluation showed a hemoglobin of 6.5 g/dL, down from 10.3 g/dL on presentation. The patient underwent an angiogram, which showed aneurysmal dilation of the gastroduodenal artery (GDA) without active extravasation, consistent with the site of likely bleeding (Figure B). Empiric coil embolization of the GDA at the level of the inferior pancreaticoduodenal artery was preformed successfully (Figure C). The patient was discharged 5 days after in stable condition. Repeat EGD was done for the evaluation of the ulcer which showed a pyloric channel ulcer with findings of the embolization coils eroding though the ulcer bed into the pyloric channel (Figure D). The pyloric channel stenosis was measured 9mm causing a partial gastric outlet obstruction which did not allow passage of an upper EGD. The patient denied any symptoms of gastric outlet obstruction or objective weight-loss post hospitalization.

Discussion: It has been reported that coil migration can occur in up to 3% of cases. Coil migration may occur in the setting of a local inflammatory response elicited by the coil. Interventions are not usually required for local migration and fibrosis of the migrated coil. Distal migration, ulceration, or re-bleeding from the migrated coil has been reported. For symptomatic patients, each case should be addressed in a multidisciplinary approach with interventional radiology and surgery. This case displays a rare case of coil migration causing a pyloric channel ulcer and stenosis.