P0044 - Duodenal Diverticulitis: A Rare Cause of Acute Pancreatitis 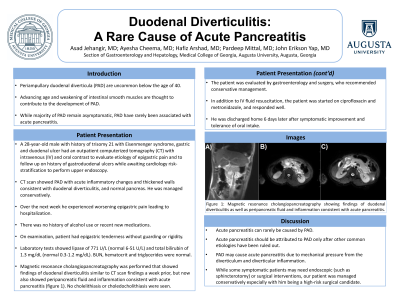 Introduction: Periampullary duodenal diverticula (PAD) are uncommon below the age of 40. Advancing age and weakening of intestinal smooth muscles are thought to contribute to the development of PAD. While majority of PAD remain asymptomatic, PAD have rarely been associated with acute pancreatitis. We present a case of a young male with Eisenmenger syndrome with duodenal diverticulitis who developed acute pancreatitis.

Case Description/Methods: A 28-year-old male with history of trisomy 21 with Eisenmenger syndrome, gastric and duodenal ulcer had an outpatient computerized tomography (CT) with intravenous (IV) and oral contrast to evaluate etiology of epigastric pain and to follow up on history of gastroduodenal ulcers while awaiting cardiology risk-stratification to perform upper endoscopy. CT scan showed PAD with acute inflammatory changes and thickened walls consistent with duodenal diverticulitis, and normal pancreas. He was managed conservatively. Over the next week he experienced worsening epigastric pain leading to hospitalization. There was no history of alcohol use or recent new medications. On examination, patient had epigastric tenderness without guarding or rigidity. Laboratory tests showed lipase of 771 U/L (normal 6-51 U/L) and total bilirubin of 1.3 mg/dL (normal 0.3-1.2 mg/dL). BUN, hematocrit and triglycerides were normal. Magnetic resonance cholangiopancreatography was performed that showed findings of duodenal diverticulitis similar to CT scan findings a week prior, but now also showed peripancreatic fluid and inflammation consistent with acute pancreatitis (figure 1). No cholelithiasis or choledocholithiasis were seen. The patient was evaluated by gastroenterology and surgery, who recommended conservative management. In addition to IV fluid resuscitation, the patient was started on ciprofloxacin and metronidazole, and responded well. He was discharged home 6 days later after symptomatic improvement and tolerance of oral intake.

Discussion: Acute pancreatitis can rarely be caused by PAD. Acute pancreatitis should be attributed to PAD only after other common etiologies have been ruled out. PAD may cause acute pancreatitis due to mechanical pressure from the diverticulum and diverticular inflammation. While some symptomatic patients may need endoscopic (such as sphincterotomy) or surgical interventions, our patient was managed conservatively especially with him being a high-risk surgical candidate.