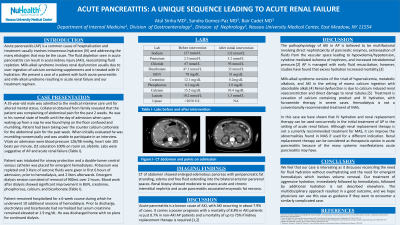 Introduction: Acute pancreatitis (AP) is a common cause of hospitalization and treatment usually involves IV hydration. The fluid depletion seen in AP can result in acute kidney injury (AKI), which may also necessitate fluid repletion. Milk-alkali syndrome (MAS) involves renal dysfunction usually due to over-ingestion of calcium containing supplements, also treated with IV hydration. We present a case of a patient with both acute pancreatitis and milk-alkali syndrome resulting in acute renal failure and our treatment regimen.

Case Description/Methods: A 35-year-old male was admitted for altered mental status. He was complaining of abdominal pain for the past 2 weeks and was in his normal state of health until he was found lying on the floor confused earlier in the day. Patient had been taking over the counter calcium carbonate for the abdominal pain for the past week. Initial blood work revealed numerous abnormalities.(Table 1) Imaging showed enlarged and edematous pancreas and peripancreatic fat stranding consistent with acute interstitial pancreatitis and echogenic renal parenchyma consistent with medical renal disease. A central venous catheter was placed for emergent hemodialysis. Potassium was repleted and 3 liters of isotonic fluids were given prior to hemodialysis, and 2 liters afterwards. Blood work after dialysis showed significant improvement in all abnormalities.(Table 1) Patient remained hospitalized for a prolonged course including additional hemodialysis sessions. He developed a pancreatic pseudocyst that was stable in size and was discharged with normal electrolytes and urine output.

Discussion: We feel that this case is important to discuss because of how we reconciled the need for fluid resuscitation without overhydrating and the need for emergent hemodialysis which involves volume removal. AP is a known cause of AKI and carries a poorer prognosis, particularly if renal replacement therapy is needed, than in patients who don’t develop AKI. Both AP and MAS are managed with early IV hydration. Hemodialysis is not a conventionally recommended treatment of MAS but was done due to altered mental status. This is the only report we found documenting a case of acute pancreatitis leading to milk-alkali syndrome resulting in acute renal failure. Our treatment regimen of aggressive hydration, immediately followed by renal replacement therapy, followed by additional hydration is not described elsewhere and we hope physicians can use this case as a guide if they were to encounter a similar case.