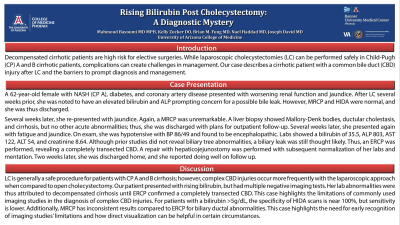 Introduction: Decompensated cirrhotic patients are high risk for elective surgeries. While laparoscopic cholecystectomies (LC) can be performed safely in Child-Pugh (CP) A and B cirrhotic patients, complications can create challenges in management. Our case describes a cirrhotic patient with a common bile duct (CBD) injury after LC and the barriers to prompt diagnosis and management.

Case Description/Methods: A 62-year-old female with NASH (CP A), diabetes, and coronary artery disease presented with worsening renal function and jaundice. After LC several weeks prior, she was noted to have an elevated bilirubin and ALP prompting concern for a possible bile leak. However, MRCP and HIDA were normal, and she was thus discharged. Several weeks later, she re-presented with jaundice. Again, a MRCP was unremarkable. A liver biopsy showed Mallory-Denk bodies, ductular cholestasis, and cirrhosis, but no other acute abnormalities; thus, she was discharged with plans for outpatient follow-up. Several weeks later, she presented again with fatigue and jaundice. On exam, she was hypotensive with BP 86/49 and found to be encephalopathic. Labs showed a bilirubin of 35.5, ALP 803, AST 122, ALT 54, and creatinine 8.64. Although prior studies did not reveal biliary tree abnormalities, a biliary leak was still thought likely. Thus, an ERCP was performed, revealing a completely transected CBD. A repair with hepaticojejunostomy was performed with subsequent normalization of her labs and mentation. Two weeks later, she was discharged home, and she reported doing well on follow up.

Discussion: LC is generally a safe procedure for patients with CP A and B cirrhosis; however, complex CBD injuries occur more frequently with the laparoscopic approach when compared to open cholecystectomy. Our patient presented with rising bilirubin, but had multiple negative imaging tests. Her lab abnormalities were thus attributed to decompensated cirrhosis until ERCP confirmed a completely transected CBD. This case highlights the limitations of commonly used imaging studies in the diagnosis of complex CBD injuries. For patients with a bilirubin >5g/dL, the specificity of HIDA scans is near 100%, but sensitivity is lower. Additionally, MRCP has inconsistent results compared to ERCP for biliary ductal abnormalities. This case highlights the need for early recognition of imaging studies' limitations and how direct visualization can be helpful in certain circumstances.