P0119 - Does Appendectomy Alter the Risk of Colorectal Cancer? A Large Population-Based Study in the United States 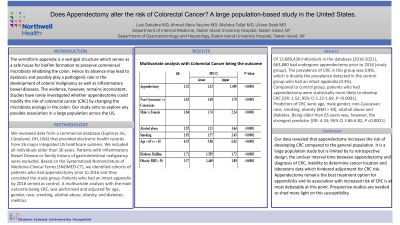 Introduction: The vermiform appendix is a vestigial structure which serves as a safe house for biofilm formation to preserve commensal microbiota inhabiting the colon. Hence its absence may lead to dysbiosis and possibly play a pathogenic role in the development of colonic malignancy as well as inflammatory bowel diseases. The evidence, however, remains inconsistent. Studies have rarely investigated whether appendectomy could modify the risk of colorectal cancer (CRC) by changing the microbiota ecology in the colon. Our study aims to explore any possible association in a large population across the US.

Methods: We reviewed data from a commercial database (Explorys Inc, Cleveland, OH, USA) that provided electronic health records from 26 major integrated US healthcare systems. We included all individuals older than 30 years. Patients with Inflammatory Bowel Disease or family history of gastrointestinal malignancy were excluded. Based on the Systematized Nomenclature of Medicine-Clinical Terms (SNOMED-CT), we identified cohorts of patients who had appendectomy prior to 2016 and they consisted the study group. Patients who had an intact appendix by 2016 served as control. A multivariate analysis with the main outcome being CRC, was performed and adjusted for age, gender, race, smoking, alcohol abuse, obesity, and diabetes mellitus.

Discussion: Our data revealed that appendectomy increases the risk of developing CRC compared to the general population. It is a large population study but is limited by its retrospective design, the unclear interval time between appendectomy and diagnosis of CRC, inability to determine cancer location, stage, and laboratory data which hindered adjustment for CRC risk. Appendectomy remains the best treatment option for appendicitis and its association with increased risk of CRC is at most debatable at this point. Prospective studies are needed to shed more light on this susceptibility.

Table: Multivariate analysis with Colorectal cancer being the outcome