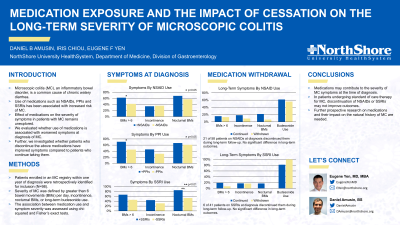 Introduction: Microscopic colitis (MC) has been strongly associated with the use of non-steroidal anti-inflammatory drugs (NSAIDs), and to a lesser extent use of proton pump inhibitors (PPIs) and selective serotonin reuptake inhibitors (SSRIs). Despite this, the relationship between medication use and presentation of MC symptoms as well as effects of cessation remain unexplored. Our aim was to examine the role of medication use on MC symptom severity at diagnosis, and the role of cessation on symptom improvement.

Methods: We queried our institution’s MC registry, a well characterized database of biopsy-proven MC, for the use of NSAIDs, PPIs, or SSRIs at time of diagnosis and prospectively followed clinical visits. To minimize recall bias, symptoms at diagnosis were collected from patients enrolled within one year of diagnosis (N=98). Severity of MC was defined by greater than 6 bowel movements (BM) per day, incontinence, or nocturnal BMs. The association between medication use and symptom severity at diagnosis, and effects of medication continuation/withdrawal were assessed using chi-squared and Fisher’s exact tests.

Results: The use of non-aspirin NSAIDs (p< 0.01) and PPIs (p=0.03) but not SSRIs was associated with more than 6 BMs per day at diagnosis. SSRI use was associated with increased risk of presenting with nocturnal BMs (p< 0.01). In this cohort, 21 of 58 patients on NSAIDs, and 6 of 41 patients on SSRIs at diagnosis discontinued their use during follow-up. However, during follow-up, patients who discontinued medications did not display significantly different severity, long term budesonide use, nor improvement of histology on biopsy compared to those who continued those medications.

Discussion: To the best of our knowledge, this is the first study to investigate the association between medication use and the severity of MC symptoms at time of diagnosis and follow-up. These findings suggest that medications may contribute to severity at diagnosis. However, in patients undergoing standard of care for MC, discontinuation of NSAIDs/SSRIs may not improve outcomes. Further studies focusing on symptomatic outcomes, and withdrawal of medications in a controlled manner are needed to validate and add to these findings.