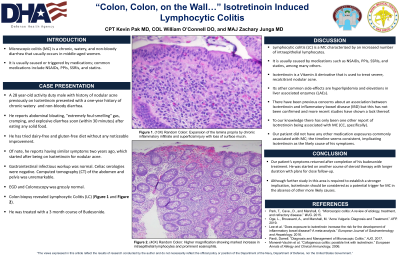 Introduction: Microscopic colitis (MC) usually manifests as a chronic, watery and non-bloody diarrhea that is distinguished from other forms of colitis by normal appearing colonic mucosa on endoscopy. Lymphocytic colitis (LC) is a subtype of MC characterized by an increased number of intraepithelial lymphocytes with normal crypt architecture. Although MC is strongly associated with other autoimmune conditions, it is believed to develop from exposure to a stimulus, mainly medications. Medications known to cause MC include NSAIDs, PPIs, SSRIs, and statins.

Case Description/Methods: A 28 year-old active duty male with history of nodular acne on isotretinoin presented with a one-year history of chronic, watery and non-bloody diarrhea as well as abdominal bloating, cramping, and foul-smelling gas. He tried dairy-free and gluten-free diets without improvement. He denied any constitutional symptoms, nausea or vomiting. He reported having similar symptoms two years ago, which began after starting isotretinoin for nodular acne. He had been scheduled for an endoscopy but his symptoms resolved upon going out to field training and stopping his isotretinoin, and he did not follow-up due to the COVID-19 pandemic. The patient was taking no other medications. Physical exam and lab testing were all normal including an infectious and inflammatory workup. Celiac serologies were negative. CT of the abdomen and pelvis was normal. He had an EGD and colonoscopy that were normal and biopsies were taken. Pathology revealed LC throughout the colon and rectum. History and timeline suggest that his LC may be related to his isotretinoin use. He was counseled to avoid using isotretinoin and was treated with a three-month course of budesonide. He had immediate response; however, his symptoms returned after completion of therapy. The recurrence prompted initiating another course of steroid therapy with symptom control after completion.

Discussion: Isotretinoin is a Vitamin A derivative that is used to treat severe, recalcitrant nodular acne. In addition to teratogenicity, isotretinoin can cause hyperlipidemia and elevations in LAEs. There have been previous concerns about an association between isotretinoin and IBD but more recent studies have shown no association. To our knowledge there has only been one other report of isotretinoin being associated with MC. Although further study in this area is required to establish a stronger implication, isotretinoin should be considered as a potential trigger for MC in the absence of other causes.