P0164 - Ogilvie’s Syndrome as a Consequence of PPI-Induced Hypomagnesemia 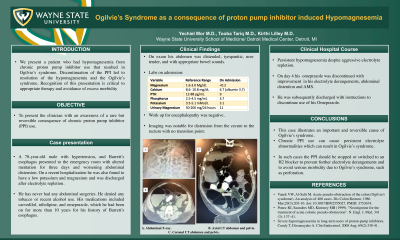 Case Description/Methods: A 78-year-old male with history of Barrett’s esophagus presented to the emergency room with altered mentation for three days and worsening abdominal distension. On a recent hospitalization he was also found to have a low potassium and magnesium and was discharged after electrolyte repletion.

He has never had any abdominal surgeries. He denied any tobacco or recent alcohol use. His medications included carvedilol, nifedipine, and omeprazole, which he had been on for more than 10 years for his history of Barrett’s esophagus.

On physical exam he was alert and oriented to person, place and time and in no acute distress. His lungs were clear to auscultation and his abdomen was distended, tympanitic to percussion, non-tender, and with appropriate bowel sounds.

On admission he had a magnesium of less than 0.2 mg/dL, a calcium of 6.7 mg/dL and a potassium of 3.1 mMol/L. His parathyroid hormone (PTH) level was low at 9 pg/mL. Urine magnesium was 11 mg. A CT abdomen and pelvis showed distension from the cecum to the rectum with no transition point raising concern for Ogilvie’s syndrome.

He was kept NPO, received intravenous fluid resuscitation and a rectal tube was placed. His magnesium continued to be low despite aggressive electrolyte repletion. On day 4 his PPI was identified as the culprit for the hypokalemia, hypomagnesemia and hypocalcemia. Discontinuation of his omeprazole led to improvement of his electrolyte derangements and abdominal distention (Figure 1). He was subsequently discharged with instructions to discontinue use of his Omeprazole and was started on an H2 blocker.

Discussion: This case illustrates an important and reversible cause of Ogilvie’s syndrome. Chronic PPI use can cause persistent electrolyte abnormalities such as hypomagnesemia and hypokalemia which can result in acute colonic pseudo-obstruction/Ogilvie’s syndrome. In such cases the PPI should be stopped or switched to an H2 blocker to prevent further electrolyte derangements and to avoid complications related to Ogilvie’s syndrome, such as perforation. 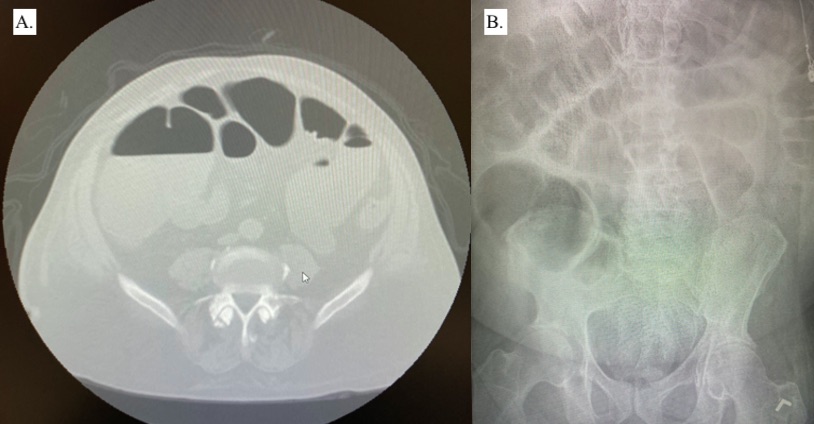