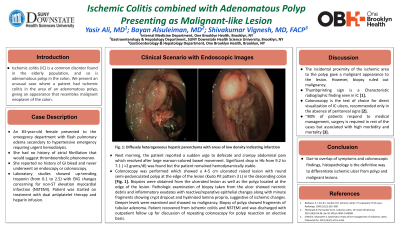 Case Description/Methods: An 83-year-old female presented to the emergency department with flash pulmonary edema secondary to hypertensive emergency requiring urgent hemodialysis. She had no history of atrial fibrillation that would suggest thromboembolic phenomenon. She reported no GI bleeding history and never underwent an endoscopy or colonoscopy. Laboratory studies showed up trending troponin (from 0.1 to 2.5) with EKG changes concerning for non-ST elevation myocardial infarction (NSTEMI). Pt was started on treatment with dual anti platelet therapy and heparin infusion. Next morning, the patient reported a sudden urge to defecate and crampy abdominal pain which resolved after large maroon-colored bowel movement. Significant drop in Hb from 9.2 to 7.1 ( >2 grams/dl) was found but the patient remained hemodynamically stable. Colonoscopy was performed which showed a 4-5 cm ulcerated raised lesion with round semi-pedunculated polyp at the edge of the lesion (Kudo Pit pattern 3 L) in the descending colon [Figure A]. Biopsies were obtained from the ulcerated lesion as well as the polyp located at the edge of the lesion. Pathologic examination of ulcer lesion biopsy showed necrotic debris and inflammatory exudates with reactive/reparative epithelial changes along with minute fragments showing crypt drop out and hyalinized lamina propria, suggestive of ischemic change. Deeper levels were examined and showed no malignancy. Biopsy of polyp showed fragments of tubular adenoma. Patient recovered from her ischemic colitis and NSTEMI and recovered well and was discharged from the hospital.

Discussion: The incidental proximity of the ischemic area to the polyp gave a malignant appearance to the area. However, biopsies confirmed there was only ischemic changes in the ulcerated area and biopsies from the polyp showed tubular adenoma with no malignant cells nor high grade dysplasia. The ischemic colitis is likely the cause of bleeding in this case. She was scheduled for follow-up for discussion of repeat colonoscopy for polyp resection on elective basis.