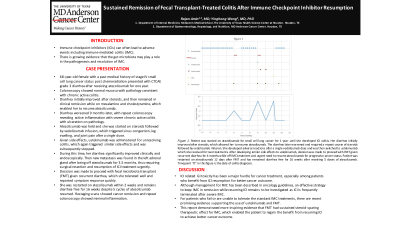 Introduction: Immune checkpoint inhibitors (ICIs) can often lead to adverse events including immune-mediated colitis (IMC). There is growing evidence that the gut microbiota may play a role in the pathogenesis and resolution of IMC.

Case Description/Methods: A 68-year-old female with a past history of stage IV small cell lung cancer status post chemoradiation presented with CTCAE grade 3 diarrhea after receiving atezolizumab for one year. Colonoscopy showed normal mucosa with pathology consistent with chronic active colitis. Her diarrhea initially improved after steroids, which enabled her to resume atezolizumab. However, diarrhea worsened 9 months later, with repeat colonoscopy revealing active inflammation with severe chronic active colitis and ulceration on pathology. Subsequently, atezolizumab was held and she was started on steroids followed by vedolizumab infusion, which triggered sinus congestion, leg swelling, and joint pain after a single dose. Due to these debilitating symptoms, ustekinumab was administered for unresolving colitis, which again triggered similar side effects and was subsequently stopped. During this time, her diarrhea significantly improved clinically and endoscopically. Then new metastasis was found in the left adrenal gland after being off atezolizumab for 3.5 months, thus requiring surgical resection and resumption of ICI treatment urgently. Given her previous side effects and recurrent diarrhea while off IMC treatment, decision was made to proceed with fecal microbiota transplant (FMT), which she tolerated well and reported quick response. She was restarted on atezolizumab within 2 weeks and has remained diarrhea free for 16 weeks. Restaging scans showed cancer remission and repeat colonoscopy showed minimal inflammation.

Discussion: ICI related GI toxicity has been a major hurdle for cancer treatment, especially among patients who benefit from ICI resumption for better cancer outcome. Although management for IMC has been described in oncology guidelines, an effective strategy to keep IMC in remission while resuming ICI remains to be investigated as ICI is frequently terminated after severe IMC. For patients who fail or are unable to tolerate the standard IMC treatments, there are recent promising evidence supporting the use of ustekinumab and FMT. This report demonstrated more inspiring evidence that FMT had sustained steroid-sparing therapeutic effect for IMC, which enabled the patient to regain the benefit from resuming ICI to achieve better cancer outcome. 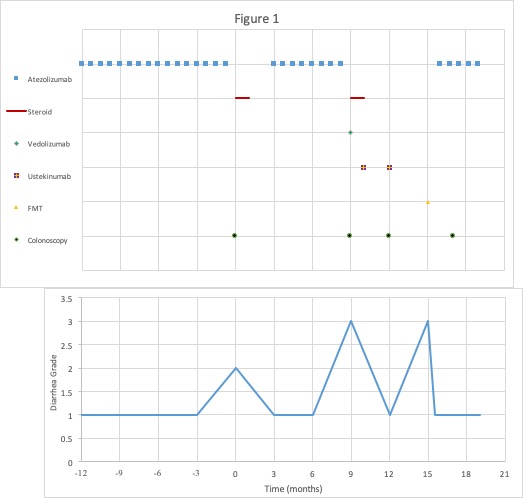 Figure: Figure 1: Patient was started on atezolizumab for small cell lung cancer for 1 year until she developed ICI colitis. Her diarrhea initially improved after steroids, which allowed her to resume atezolizumab. The diarrhea later worsened and required a repeat course of steroids followed by vedolizumab infusion. She developed adverse reactions after a single vedolizumab dose and was then switched to ustekinumab which she received for two treatments. After developing similar side effects to ustekinumab, decision was made to proceed with FMT given recurrent diarrhea for 4 months while off IMC treatment and urgent need to resume atezolizumab for progressive cancer status. Patient was restarted on atezolizumab 12 days after FMT and has remained diarrhea free for 16 weeks after receiving 5 doses of atezolizumab. Timepoint “0” in this figure is the date of colitis diagnosis.