P0242 - The Lord of the Rings: A Rare Endoscopic Presentation of Metastatic Breast Cancer to the Colon 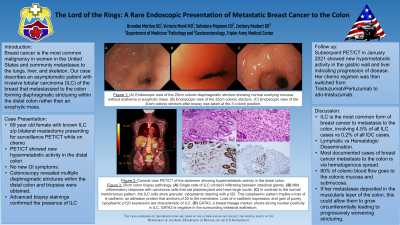 Introduction: Breast cancer is the most common malignancy in women in the United States and the second leading cause of cancer death. Most common sites of metastases are the lungs, liver, brain and skeleton. Our case describes a patient with invasive lobular carcinoma (ILC) of the breast that metastasized to the colon which presented without gastrointestinal symptoms or exophytic masses on colonoscopy but rather diaphragmatic concentric structuring within the distal colon.

Case Description/Methods: A 68 year old female with recently diagnosed ILC now status post bilateral mastectomy and currently undergoing chemotherapy presented for repeat serial positron emission tomography/computed tomography (PET/CT) for her skeletal and skin metastases. It demonstrated new hypermetabolic activity in the colon and bowel wall thickening. She denied constipation, diarrhea, abdominal pain, nausea, melena, hematochezia, and averaged 1-2 bowel movements per day. She was then taken for colonoscopy which revealing a diaphragm-like stricture at 20cm of scope insertion, which the pediatric colonoscope was unable to traverse. A stricture scope was then used to advance to the splenic flexure with findings of two additional diaphragm-like strictures at 25cm and 40cm, all with normal intervening colonic mucosa. There were no exophytic masses found during the procedure. Biopsies were obtained from each of the three colonic strictures which showed infiltrative cells in the submucosa that highlighted with GATA-3 and p120 stains, an immunophenotype consistent with metastatic lobular breast carcinoma. She was referred to the colorectal surgeon for possible ostomy formation, but due to lack of obstructive symptoms, deferred surgery and opted for prophylactic medical management of constipation.

Discussion: Breast cancer is common malignancy in women however metastasis to the colon is rare. Of these, most present as exophytic masses and present with symptoms of obstruction. A possible explanation of the unusual presentation in this case involves the mechanism of metastasis. The main pathway of distant breast cancer metastasis is via hematogenous spread. 80% of colonic blood flow perfuses mucosal and submucosal layers with only 20% supplying the muscularis layer. If however there was metastasis within the muscularis layer it would allow for circumferential growth with gradual invasion and stenosis leading to stricturing as appreciated in this case. 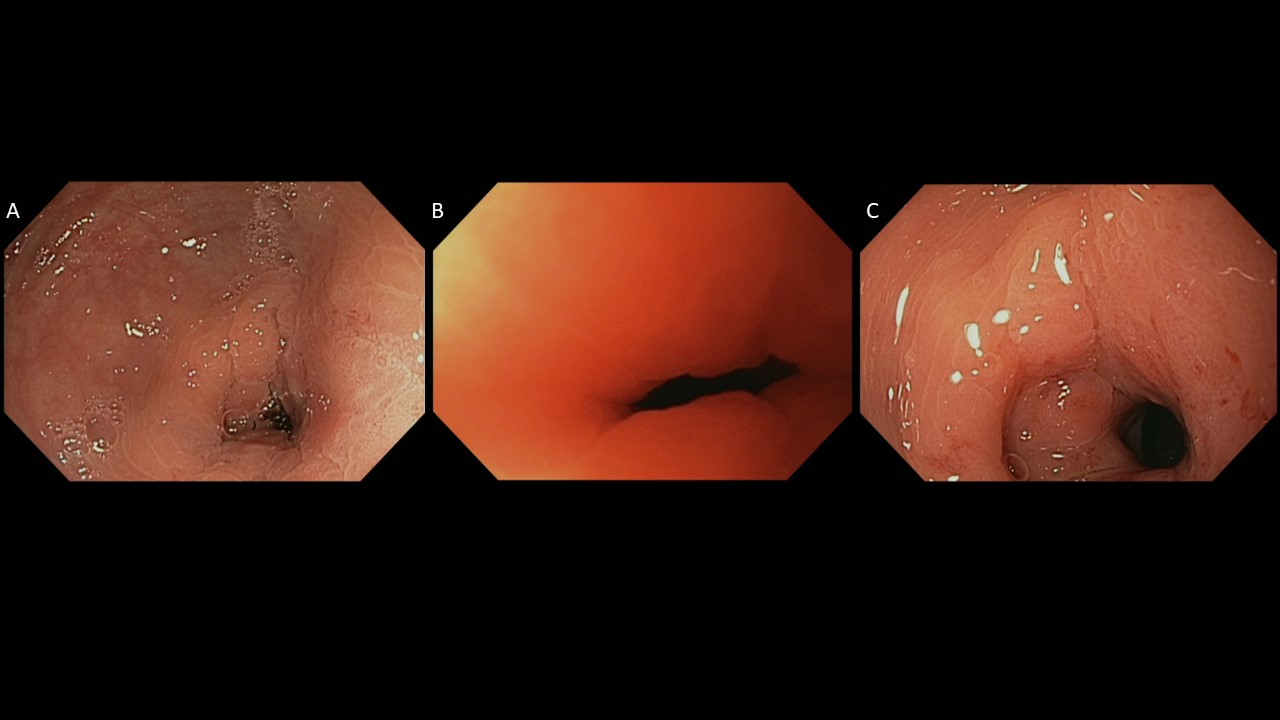