P0332 - Esophageal Melanocytosis Next to an Inlet Patch: An Interesting Association 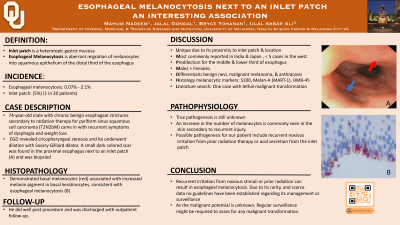 Introduction:
Melanocytes migrate during early embryogenesis from the pleuripotent neural crest cell in the ectoderm to differentiate into melanocyte precursors called melanoblasts. Esophagus lacks any melanocytes. Esophageal melanocytosis is a rare condition characterized by aberrant migration of melanocytes into squamous epithelium of the distal third of the esophagus. Reported incidence is 0.07% to 2.1%. Inlet patch is a heterotopic gastric mucosa found incidentally on endoscopy in about 1 in 20 patients (5%). We report a unique case of esophageal melanocytosis in the proximal esophagus next to an inlet patch.


Case Description/Methods:
A 74-year-old male with a history of chronic benign esophageal strictures secondary to radiation therapy for pyriform sinus squamous cell carcinoma (T2N2bM) came in with recurrent symptoms of dysphagia and weight loss. His upper gastrointestinal endoscopy (UGE) revealed cricopharyngeal stenosis and he underwent dilation with Savary-Gilliard dilator. A small dark colored scar was found in the proximal esophagus (15 cm from incisors) next to an inlet patch (A) and was biopsied due to its concerning appearance. Histopathological exam demonstrated basal melanocytes (red) associated with increased melanin pigment in basal keratinocytes, consistent with esophageal melanocytosis (B). He did well post procedure and was discharged with outpatient follow-up.


Discussion:
Esophageal melanocytosis has been reported in India & Japan and < 5 cases have been reported in the west. It has a predilection for the middle & lower third of esophagus and is usually found incidentally in males on UGE. Differentials include benign nevi, malignant melanoma, and anthracosis. Histology melanocytic markers S100, Melan-A (MART-1), and HMB-45 are the key to a definitive diagnosis. The true pathogenesis is still unknown. An increase in the number of melanocytes is commonly seen in the skin secondary to recurrent injury. The same pattern applies to the esophagus in chronic esophagitis and GERD thus explaining its known association with melanocytosis.
Our patient was unique due to its proximity to inlet patch and proximal esophageal location. Possible pathogenesis include recurrent noxious irritation from his prior radiation therapy or acid secretion from the inlet patch. Only 1 case has been cited before that resulted in a lethal malignant transformation. Due to its rarity, and scarce data no guidelines have been established regarding its management or surveillance.