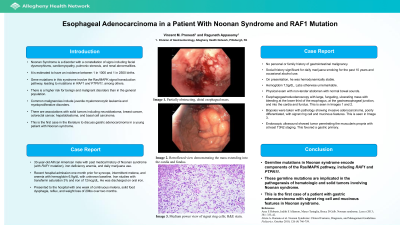 Introduction: Noonan syndrome is a disorder characterized by a constellation of signs including facial dysmorphisms and cardiac defects. It is estimated to have an incidence of approximately 1 in 2500 births. Common malignancies in this disorder include juvenile myelomonocytic leukemia and myeloproliferative disorders. There are also associations with neuroblastoma, breast cancer, colorectal cancer, hepatoblastoma, and basal cell carcinoma. This is the first case in the literature to discuss esophageal adenocarcinoma in a young patient with Noonan syndrome associated with RAF1 mutation.

Case Description/Methods: A 33-year-old African American male with a past medical history of Noonan syndrome with mutation in the RAF1 gene and iron deficiency anemia presented to the emergency department with melena, solid food dysphagia, and 20lb weight loss over the past two months. He was also having daily black bowel movements over the same time period. He complained of dysphagia to solids. There was no family history of malignancy. He smoked marijuana daily for the past 10 years. On presentation, he was hemodynamically stable. Hemoglobin was 7.5g/dL. Labs were otherwise unremarkable. Physical exam revealed a non-tender abdomen with no palpable masses. Esophagogastroduodenoscopy revealed a large, fungating, ulcerating mass with bleeding at the lower third of the esophagus at the gastroesophageal junction and extending into the cardia and fundus. This can be seen in the image. Pathology from biopsies showed invasive adenocarcinoma, poorly differentiated, with signet ring cell and mucinous features. The patient then had endoscopic ultrasound with the tumor penetrating the muscularis propria with at least T3N2 staging.

Discussion: This is the first case in the literature to discuss esophageal adenocarcinoma with signet ring cell and mucinous features in a young patient with Noonan syndrome. There are germline mutations in this syndrome encoding components of the RAS/MAPK pathway, including RAF1 which was present in our patient. This germline mutation has been shown to be altered in approximately 1.27% of gastroesophageal junction adenocarcinoma patients. It has also been shown that sorafenib, which targets RAF1, can increase progression free survival in patients with refractory gastroesophageal junction cancer. This genetic association in our patient with Noonan syndrome is possibly associated with the development of his esophageal adenocarcinoma and has not been described before in the literature.