P0368 - Save the Best for the Last: Fully Covered Metal Stent for Refractory Esophageal Variceal Hemorrhage 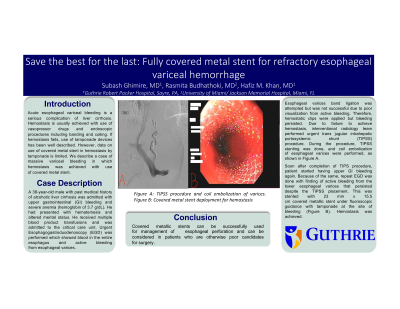 Introduction: Acute esophageal variceal bleeding is a serious complication of liver cirrhosis. Hemostasis is usually achieved with use of vasopressor drugs and endoscopic procedures including banding and coiling. If hemostasis fails, use of tamponade devices has been well described. However, data on use of covered metal stent in hemostasis by tamponade is limited. We describe a case of massive variceal bleeding in which hemostasis was achieved with use of covered metal stent.

Case Description/Methods: A 38-year-old male with past medical history of alcoholic liver cirrhosis was admitted with upper gastrointestinal (GI) bleeding and severe anemia (hemoglobin of 3.7 g/dL). He had presented with hematemesis and altered mental status. He received multiple blood product transfusions and was admitted to the critical care unit.

Urgent Esophagogastroduodenoscopy (EGD) was performed which showed blood in the entire esophagus and active bleeding from esophageal varices. Esophageal varices band ligation was attempted but was not successful due to poor visualization from active bleeding. Therefore, hemostatic clips were applied but bleeding persisted. Due to failure to achieve hemostasis, interventional radiology team performed urgent trans jugular intrahepatic portosystemic shunt (TIPSS) procedure. During the procedure, TIPSS stenting was done, and coil embolization of esophageal varices were performed, as shown in Figure A.

Soon after completion of TIPS procedure, patient started having upper GI bleeding again. Because of the same, repeat EGD was done with finding of active bleeding from the lower esophageal varices that persisted despite the TIPSS placement. This was stented with 23 mm x 15.5 cm covered metallic stent under fluoroscopic guidance with tamponade at the site of bleeding (Figure B). Hemostasis was achieved.

Discussion: Covered metal stent (CMS) was preferred over standard Sengstaken-Blakemore (SB) tube due to anticipated longer duration of tamponade due to patient’s coagulopathy and reduce risk of esophageal necrosis. CMS can be safely used to achieve hemostasis in esophageal hemorrhage.