P0370 - Black Esophagus in the Setting of Alcohol Abuse 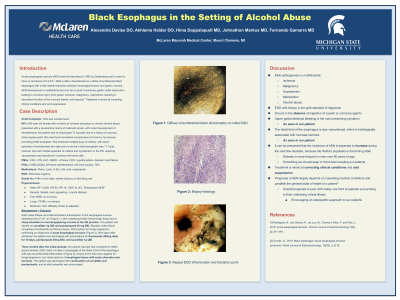 Introduction: Acute esophageal necrosis (AEN) is often characterized as a distal circumferential black esophagus with a well marked transition between esophageal lesions and gastric mucosa. Since 1990, this condition has been noted to have an incidence of 0-0.2%, limiting understanding of the disease process and management. We discuss a 60-year-old female in the hopes of providing more information regarding AEN.

Case Description/Methods: A 60-year-old female with a history of cirrhosis presented with a several day history of melanotic stools, with recent development of hematemesis; the patient was on clopidogrel 75 mg daily. Hemoglobin upon admission was 11.7 g/dL, the patient had multiple episodes of melena and hypotension requiring vasopressors and one unit of packed red blood cells. Initial EGD noted diffuse esophagitis of the distal 16 cm of the esophagus characterized by diffuse circumferential black discoloration of the esophageal mucosa extending from 21-37 cm (Figure 1), with underlying friable hemorrhagic tissue and a sharp transition to normal-appearing mucosa at the GE junction. No biopsy was performed due to friable mucosa and clopidogrel use; the patient was started on sucralfate 1g QID and pantoprazole 40 mg BID. Repeat EGD three days later was unchanged. Biopsies noted neutrophils and fibrous tissue, PAS positive for fungal organisms, with iron stain negative, confirming our diagnosis of acute esophageal necrosis. Nine days after admission the patient was discharged with fluconazole 200mg daily for 10 days, pantoprazole 40mg BID, and sucralfate 1g oral suspension QID. Three months after the initial episode, the patient returned with complaint of coffee ground emesis. Repeat EGD noted LA class C esophagitis of the distal 2/3rd of the esophagus with pan-circumferential inflammation; biopsy at the time was negative for fungal organisms, but noted sections of esophageal tissue with acute ulceration and necrosis. The patient was discharged with continuation of sucralfate and pantoprazole, and alcohol cessation was encouraged.

Discussion: AEN development is multifactorial and can be a result of ischemia, gastric outlet obstruction leading to corrosive injury from gastric contents, malignancy, malnutrition, and hypoxia. Treatment is aimed at correcting clinical conditions and acid suppression. By presenting this case, we aim to add treatment options to the literature, and encourage other physicians to consider AEN when dealing with gastrointestinal bleeding. 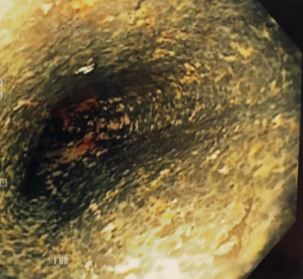