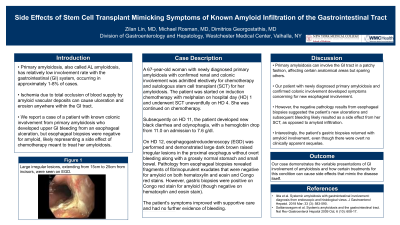 Introduction: Primary amyloidosis, also called AL amyloidosis, has relatively low involvement rate with the gastrointestinal (GI) system, occurring in approximately 1-8% of cases. Ischemia due to total occlusion of blood supply by amyloid vascular deposits can cause ulceration and erosion anywhere within the GI tract. We report a case of a patient with known colonic involvement from primary amyloidosis who developed upper GI bleeding from an esophageal ulceration but was found to have negative esophageal pathology of amyloidosis, likely representing a side effect of chemotherapy meant to treat her amyloidosis.

Case Description/Methods: A 67-year-old woman with newly diagnosed primary amyloidosis with confirmed renal and colonic involvement was admitted electively for chemotherapy and autologous stem cell transplant (SCT) for her primary amyloidosis. The patient was started on induction chemotherapy with melphalan on hospital day (HD) 1 and underwent SCT uneventfully on HD 4. She was continued on chemotherapy and subsequently developed new black diarrhea and odynophagia, with a hemoglobin drop from 11.0 at admission to 7.6 g/dl on HD 11. On HD 12, esophagogastroduodenoscopy (EGD) was performed and demonstrated large dark brown raised irregular lesions in the proximal esophagus without overt bleeding along with a grossly normal stomach and small bowel. Pathology from esophageal biopsies revealed fragments of fibrinopurulent exudates and were negative for amyloid on both hematoxylin and eosin and Congo red stains. However, gastric biopsies were positive on Congo red stain for amyloid (though negative on hematoxylin and eosin stain). The patient’s symptoms improved with supportive care and had no further evidence of bleeding.

Discussion: Primary amyloidosis can involve the GI tract in a patchy fashion, affecting certain anatomical areas but sparing others. Our patient with newly diagnosed primary amyloidosis and confirmed colonic involvement developed symptoms concerning for new esophageal involvement. However, the negative pathology results from esophageal biopsies suggested the patient’s new ulcerations likely resulted as a side effect from her SCT, as opposed to amyloid infiltration. Interestingly, the patient’s gastric biopsies returned with amyloid involvement, even though there was no clinically apparent sequelae. Our case demonstrates the variable presentations of GI involvement of amyloidosis and how certain treatments for this condition can cause side effects that mimic the disease itself.